On the occasion of the World Population Day that is annually observed on July 11, the president has advised all those who might influence people’s minds that they should tell the masses about the importance of breastfeeding for controlling the population. 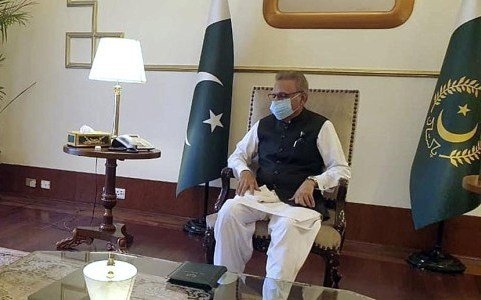 President Dr. Arif Alvi on Saturday asked the religious scholars and media to spread awareness among the people about breastfeeding and population control.

On the occasion of the World Population Day that is annually observed on July 11, the president has advised all those who might influence people’s minds that they should tell the masses about the importance of breastfeeding for controlling the population.

He has urged the scholars and media both to endorse breastfeeding as the most natural practice to avoid unwanted pregnancies and prevent the mothers from serious health implications.

In his message on World Population Day, he said that a fast increase in the population would always pressurize the growth of the economy and available resources.

He added that due to this gap between the population and the available resources, the country would always be fighting against poverty, hunger, poor maternal health, malnutrition, and stunting.

According to the UN, the world population grows to 1 billion in hundreds of thousands of years but after that in just almost 200 years, it grew seven times faster than the earlier pace.

To control the increase in population, the president referred to the holy Quran that tells the mothers to go for breastfeeding as the most natural practice for 24-36 months.

The president who is also the chairperson at Population Task Force further said that by practicing breastfeeding for 24-36 months mothers could avoid pregnancy during this time and could also avoid malnutrition,.

By giving their children a proper diet through breastfeeding, mothers can also prevent their children from stunting, he said adding that religious scholars have a significant role to play in this regard.

The president informed that there were four million unwanted pregnancies in Pakistan because of the unavailability of contraceptive measures.

He also said that it was also under consideration to manufacture contraceptive things locally.

He urged media to play a frontman role against this alarming issue exactly the same way it did while spreading awareness and standard operating procedures (SOPs) about coronavirus.

While quoting Prime Minister Imran Khan, he said that the prime minister asked him to chair the Population Task Force with a comment that “It is a National Emergency”.

It is important to mention here that the United Nations Population Fund (UNFPA) has recently projected that if the lockdown situation prolongs for six more months and the health services remain at a halt, 47 million women in low- and middle-income countries may not be able to access modern contraceptives and this might cause around seven million unintended pregnancies.