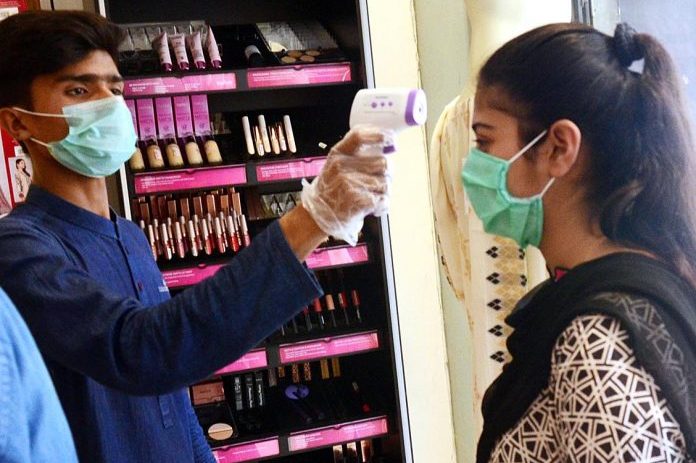 In the context of a recent spike in the number of coronavirus cases across the country, the government has decided to take necessary measures to combat the spread of the virus that took place particularly after the celebrations of Eid.

The government has made it mandatory for everyone to wear masks while going out in the markets and populated areas. In Islamabad, anybody who is found without wearing a mask would be fined for three thousand rupees on the spot. In case of severe violations, the violators can be sent to jail as well.

Deputy Commissioner, Islamabad has announced in this regard that wearing masks at all the public places has been made mandatory and anybody found violating the instructions would be charged under Section 188 CrPC. It has also been announced by the city government that mosques, offices, public transport, markets, and roads will be properly checked for the violators.

Gilgit administration has also stopped the entry of tourists coming from all the districts. Deputy Commissioner, Gilgit has also appealed to the public not to travel without any reason amid the corona outbreak.

According to the latest reports, the number of coronavirus patients in Pakistan is 69,496 while 1483 people have lost their lives due to the deadly virus so far.

Dr. Zafar Mirza has also said that the local transmission of coronavirus is on the rise in Pakistan due to the non-seriousness of the public out there.

Prime Minister Imran Khan has called for a meeting of the National Coordination Committee (NCC) today (Monday) to discuss the current situation in the country. Under the chair of the prime minister, it will be decided in the meeting either the lock-down should be made relaxed or strict in the current situation.

Federal Minister Asad Umar also convened a meeting of the National Command and Operations Center in this regard and discussed the current situation with the members.

It was also decided that strict action will be taken against those found violating the SOPs set by the government.

It is important to mention here that a rise in coronavirus cases was expected after Eid celebrations as SOP violations were seen throughout the country during that time. For a couple of days now, the number of deaths and new patients is also increasing worsening the situation in the country. To avoid the spread of the virus, necessary actions and steps are being by the government now.