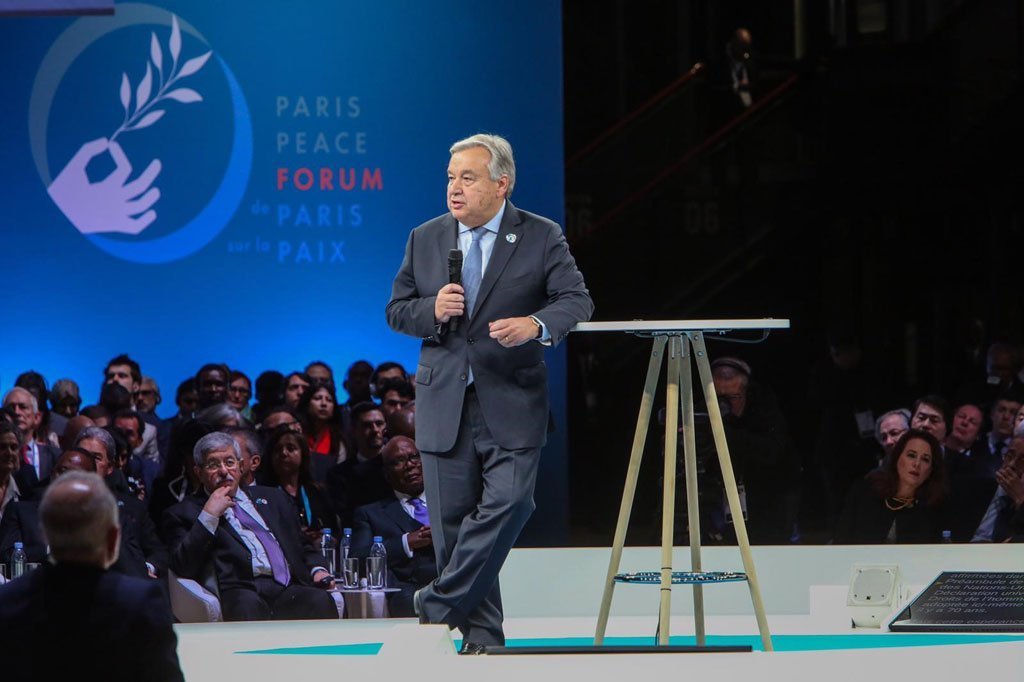 United Nations Secretary-General Antonio Guterres has stressed the need for strong multilateral institutions adapted to challenges of today and tomorrow that can make the UN more effective and agile in this troubled and fractured world.

He was speaking at the Paris Peace Forum in the French capital as countries around the world commemorated the official end of the First World War in 1918. Drawing parallels with the geopolitical landscape in the early 20th century, the UN chief said that today’s world as neither bipolar, unipolar, nor multipolar, but rather chaotic and uncertain.

He said that today conflicts are not between sovereign states, but rather consist of asymmetrical conflicts, in which countries are often pitted against non-state actors. When third-party states interfere, these conflicts take on a regional dimension, Guterres said at a time when relations between the most powerful countries are dysfunctional, and with a Security Council that is frequently paralyzed.

The UN chief declared that conflict prevention is more indispensable than ever, citing growing links to a new form of global terrorism, as seen in Libya and the Lake Chad region, and the danger of nuclear proliferation. He called for the root causes to be addressed, as well as the prevention of new tensions and conflicts.

Guterres explained that international cooperation is the only way to solve these issues, which is why crisis prevention and mediation, as well as a framework for fighting violent extremism, and reinforcing peace and international security, are at the heart of his UN reforms. He said that the world is facing five major risks.

“Firstly, an economic, technological and geostrategic fault line. This sees the planet divided in two, with the two largest economies dividing the world between them, each imposing their own financial and economic rules on their spheres of influenced,” he said. “We must do all we can to avoid this great fracture and preserve a global system, a universal economy that respects international law, a multipolar world with solid multilateral institutions,” he said.

The second risk lies in the social contract between citizens and governments, leading to a wave of demonstrations around the world, which demonstrates a growing distrust in institutions and political leaders, Guterres said. “The people are suffering and want to be heard,” he said.

RACE AGAINST TIME: This leads to a third risk, a solidarity gap, and rise in inward-looking attitudes, in which the most vulnerable – minorities, refugees, migrants, women and children – are the first to suffer, he said. “Fear of foreigners is being used for political ends. Intolerance and hatred are becoming commonplace,” he said.

“People who have lost everything are being blamed for all the world’s ills. This exacerbates the polarization of political life and the risk of divided societies.” Guterres said that the fourth risk is the climate crisis, a race against time for the survival of the civilization, a race that everyone is losing. He described record temperatures, receding icecaps, expanded deserts, and destructive storms.

“If we fail to act now, history will remember that we had all means needed to fight back, but that we chose to do nothing,” he said. However, he continued, solutions exist and if countries find the political will to act, honour pledges to cut emissions, and mobilize funding for sustainable development, catastrophe can be averted.

He said that a technological divide is the fifth emerging global fault-line, because, whilst new technology has potential to be a powerful tool for peace and sustainable development, it can also increase risk and accelerate inequalities. Solutions outlined by the secretary-general include education systems that integrate lifelong learning, because “we must no longer simply learn, but learn how to learn.”

Turning to the rise of hate speech and the manipulation of information, Guterres said that he plans to make the UN a place in which governments, companies, researchers and civil society can meet to define together the red lines and best practice rules. He said the threat of cyber-attacks and a new cyber-arms race involving killer robots and autonomous weapons must also be tackled.

He said that machines that have the power and discretion to kill without human intervention are politically unacceptable and morally despicable. He said that the world must instead ensure that artificial intelligence is used to guarantee that everyone can live in dignity, peace and prosperity. He concluded his speech with a vision of multilateralism that can adapt to the challenges of today and tomorrow, and make the UN more effective.

He said that multilateralism must be networked, and close to the people, working hand in hand with regional organisations, but also with international financial institutions, development banks and specialized agencies. It must also be inclusive with the full participation of civil society, including young people, business, academic and philanthropic circles, and tackle gender equality, an issue that the UN is addressing, with a strategy to achieve parity well before 2030.

The UN chief called for a sustained strategic vision to solve the world’s interdependent and long-term challenges, noting that the international community has shown, in the past, that it can come together and rise to the occasion: “So let us fight, fight and not give up”.