Toshakhana reference accuses both Nawaz Sharif and Asif Zardari of violating Toshahana’s rules to enjoy the luxury gifts presented from the dignitaries of other countries. 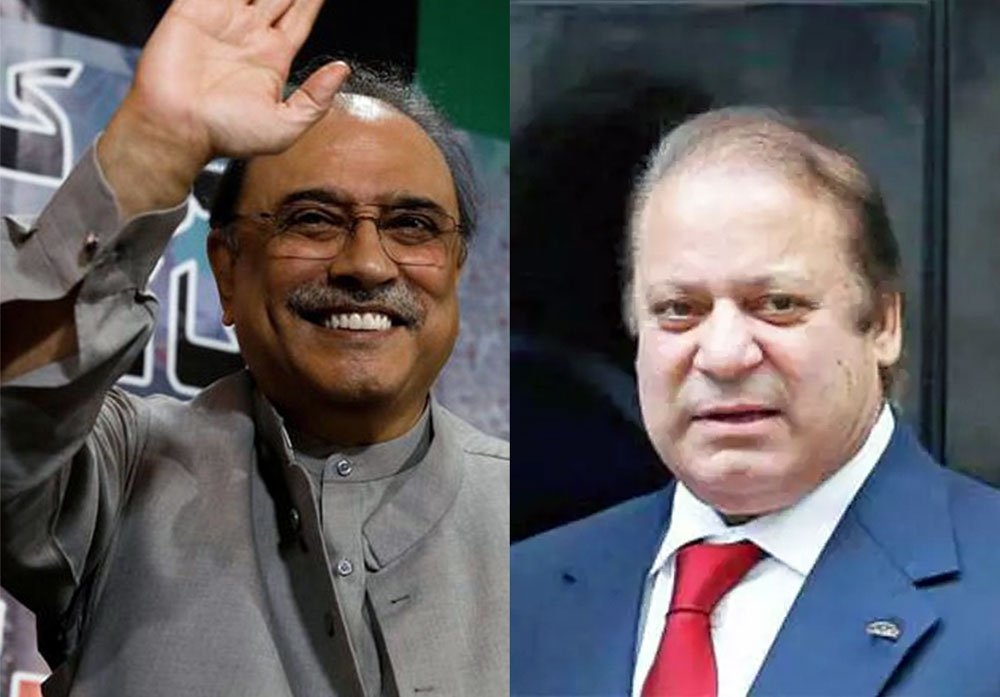 An accountability court in Islamabad on Tuesday, after a hearing in the Toshakhana reference, issued a summons for PML-N leader Nawaz Sharif and sent bailable arrest warrants for former president Asif Ali Zardari to National Accountability Bureau (NAB).

According to the details, the accountability court, after a hearing of Toshakhana reference, advertised summons for Nawaz Sharif on its premises giving him one last chance to appear before the court on August 17 to respond to the reference filed against him.

Reportedly, the court of AC-III Judge Asghar Khan has noted the continuous absence of Nawaz Sharif in the court proceedings and started the process to declare him as an absconder.

The court also observed that former prime minister Nawaz Sharif was intentionally not appearing in the court.

On the other hand, the court also noted the continuous absence of former president Asif Zardari in the reference proceedings and issued arrest warrants for him. The court sent Zardari’s arrest warrants along with the bail bonds of Rs 50,000 to NAB as well.

The court ordered that Asif Zardari would produce the surety bonds of Rs 50,000 and one guarantor before the court and if he remains unable to do so, he would be arrested by the state and produced before the court.

It is important to note that Toshakhana reference accuses both Nawaz Sharif and Asif Zardari of violating Toshahana’s rules to enjoy the luxury gifts presented from the dignitaries of other countries. All the support and facilitation in this regard was offered by the then prime minister Syed Yousuf Raza Gillani.

Toshakhana is a country’s gift store where all the gifts which are presented by the heads of delegates of other countries are stored and preserved.

These gifts are the property of the country and no official including president and prime minister can avail them for their personal use unless they are auctioned openly. As per the rules, gifts having a market value of less than Rs 10,000 can be used by the officials without paying anything.

The NAB reference which was filed in March 2020 says that Yousuf Raza Gillani when he was the prime minister, gave illegal benefits to Asif Zardari and Nawaz Sharif by allowing them to keep the gifts given by various states for their personal use.

The reference states that both Zardari and Nawaz retained expensive vehicles by paying only 15% of their total value.

In reference, Zardari received two luxury vehicles from the United Arab Emirates (BMW750 Li model 2005, Lexus Jeep model 2007) and one vehicle from Libya (BMW 760 Li model 2008) in 2008. According to the law, Zardari was supposed to deposit the vehicles with the Toshakhana but he got them in his personal use.

According to the reference, Nawaz Sharif who was not holding any public office in 2008 also got an illegal relaxation from Yousaf Raza Gillani to retain the Toshakhana gifts.