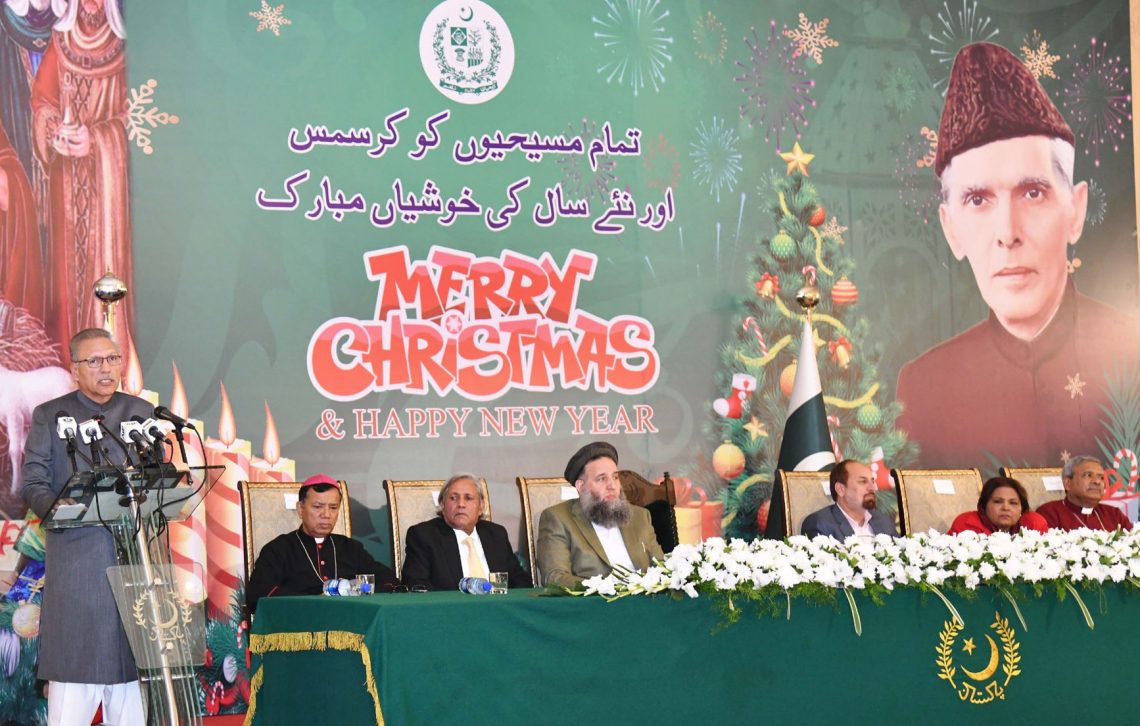 President Dr. Arif Alvi cut a cake along with Christian religious leaders and ambassadors during a ceremony held at the Aiwan-e-Sadr in Islamabad in connection with the Christmas celebrations.

Bishops from Lahore led prayers for the peace and prosperity of Pakistan, while a group of students from the Edward College of Peshawar presented different Christmas songs.

Addressing the ceremony, Dr. Arif Alvi reiterated that the government is committed to protecting equal rights of all citizens as enunciated by Quaid-e-Azam Muhammad Ali Jinnah in his historic address on August 11, 1947, and as enshrined in the constitution.

He felicitated the Christian community on the joyous occasion and said he felt pleased that the Ministry of Religious Affairs had arranged it at the Aiwan-e-Sadr. He said that the coexistence of minorities with Muslims is reflected in the white color of the national flag.

The president said that the Quaid’s address to Pakistan’s first Constituent Assembly had ensured complete religious freedom to all the minorities of the country. He said that religious harmony and tolerance is part of their religious belief.

ISLAMOPHOBIA: He resolved that the federal and provincial governments would continue striving to fulfill their commitment in that regard, and ensure the protection of minorities’ rights as guaranteed by the constitution and in accordance with the vision of Prime Minister Imran Khan.

Dr. Arif Alvi said that the government would ensure that all the minorities would be treated equally and the onus to that effect was rested with the relevant authorities. He regretted the growing Islamophobia in the West and appreciated the Church for raising its voice against such an issue.

RELIGION OF PEACE: The ceremony was attended by First Lady Samina Alvi, ministers, lawmakers, senior government officials, religious leaders of different communities, ambassadors and a large number of Christians. In his address, Minister for Religious Affairs and Interfaith Harmony Noorul Haq Qadri congratulated the Christian community and maintained that Islam is a religion of peace and harmony.

He said that all the world religions taught peace and harmony, and referred to the message of Quaid-e-Azam Muhammad Ali Jinnah in which he had stated that Pakistan belonged to all communities residing in it. He said that Pakistan had been the safest country for minorities when compared with the alarming situation in its neighborhood.

KARTARPUR CORRIDOR: The minister said that the opening of the Kartarpur Corridor was another milestone and showed as to how much the government attached significance to the minorities’ religious sites. In Pakistan, he said that there is zero-tolerance for the forced religious conversions.