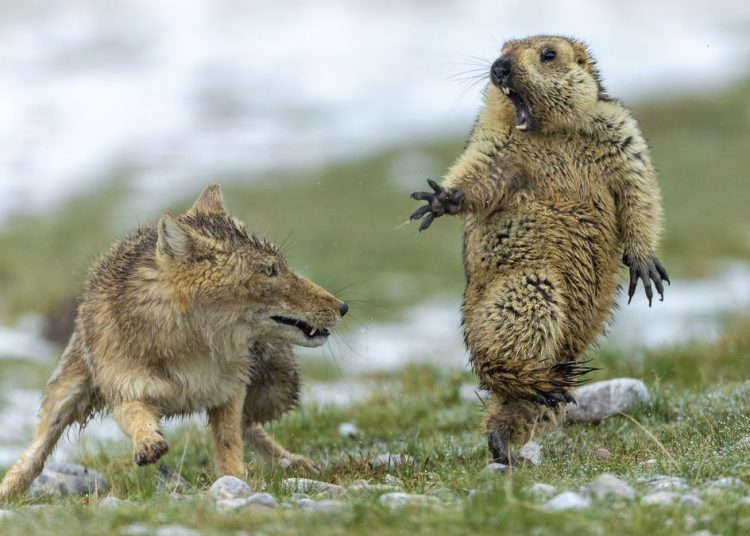 A striking picture of the battle between a Tibetan fox and a marmot in a remote mountainous region of China has won the Wildlife Photographer of the Year competition.

The winning action shot, titled The Moment, shows a dramatic stand-off in a high alpine meadow, was taken by Yongqing Bao, a native Tibetan from the Chinese province of Qinghai. The wildlife photographer and ecologist beat more than 48,000 entries from 100 countries to scoop top prize in the prestigious international competition run by the Natural History Museum.

Winning images in 19 categories, ranging from antelopes leaving trails in the snow, an eagle landing, an underwater shot of a garden of eels, and a close-up of a tiny ant-mimicking crab spider, have also been unveiled. Chairwoman of judging panel Roz Kidman Cox said the shot of the fox and marmot taken on the Qinghai-Tibet Plateau was photographically the perfect moment.

“Images from the Qinghai-Tibet Plateau are rare enough, but to have captured such a powerful interaction between a Tibetan fox and a marmot, two species key to the ecology of this high-grassland region, is extraordinary.” Cruz Erdmann, a 14-year-old born in Bali and now living in New Zealand, won Young Wildlife Photographer of the Year for his portrait of an iridescent big fin reef squid on a night dive in the Lembeh Strait off North Sulawesi, Indonesia.

Judges said the shot by the teenager – who gained his diving certificate aged just 10 – was a resounding achievement. Theo Bosboom, nature photographer and member of the judging panel, said: “To dive in the pitch dark, find this beautiful squid and to be able to photograph it so elegantly, to reveal its wonderful shapes and colors, takes so much skill.”

Among the category winners was Thomas Easterbrook, now 11, from Buckinghamshire, who won the 10 years and under section of the competition for a shot of a hummingbird moth he captured on holiday in France. A collection of the best photographs will go on display at London’s Natural History Museum, before touring the UK and internationally.