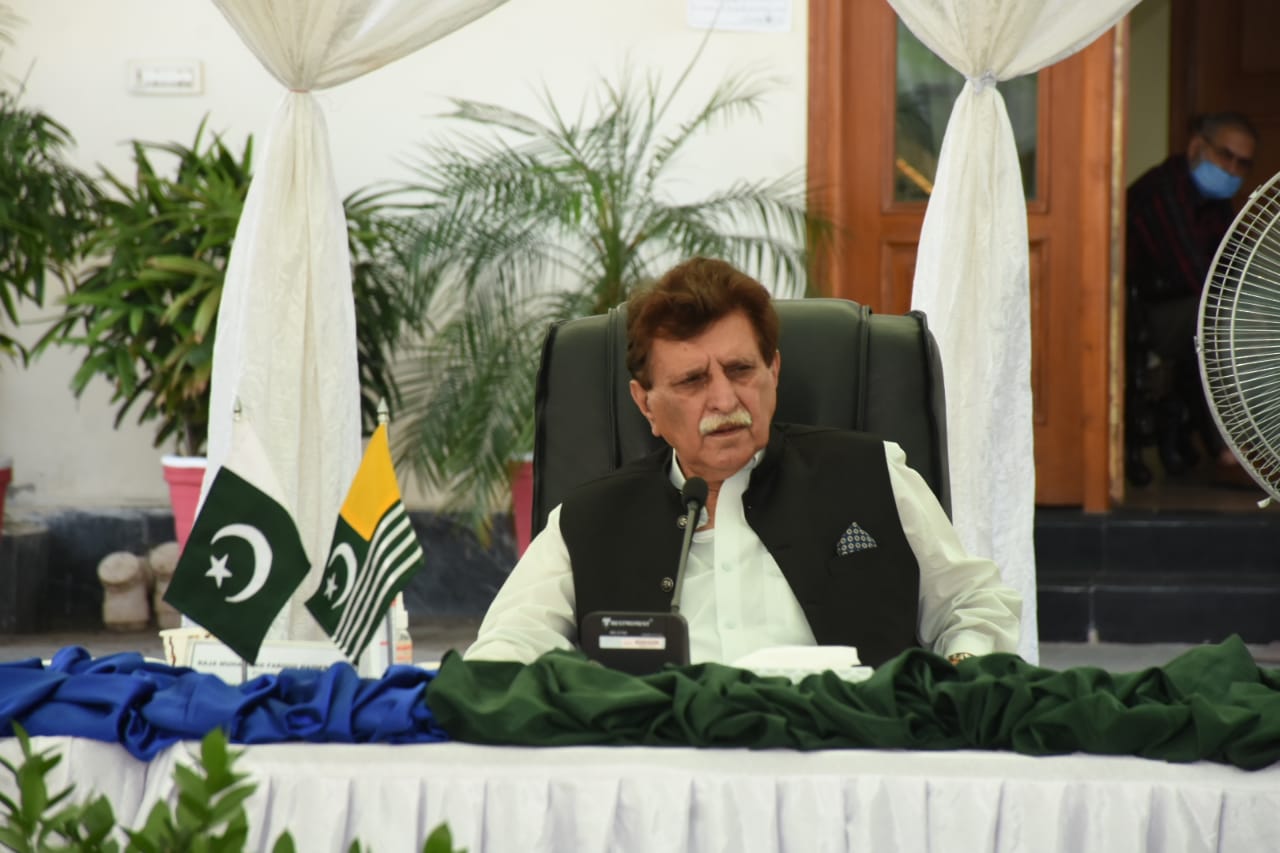 Amidst budget season, as the political temperature around the country starts rising faster than the COVID Curve, controversy seems to be cooking up in Azad Kashmir’s cabinet as well, where along with budget-related formalities, Prime Minister Farooq Haider Khan was forced (or inclined) to refer to growing questions over a possibly upcoming 14th amendment, in the Azad Kashmir Interim Constitution.

The recent fervor was fueled by a public leak of a document titled, “Draft Proposed by Government of Azad Jammu & Kashmir”. The alleged fourteenth amendment, as titled proposed by the Government of AJK is a complete barrel roll back on almost the original condition of the former constitution before the current governments own, much-touted, the thirteenth amendment.
The draft, though not presented in the parliament yet, stirred speculations over the government’s acceptance of the unworkable nature of its former legislative product, as well as questions over ‘invisible hands’ towards which the current PML-N Prime Minister of AJK is well known for pointing in almost all situations.

The 13th amendment, along with the legislative makes up of the state, changed the name (if not nature) of AJK’s apex legislation from the Interim Constitution Act, 1974 to the Interim Constitution, 1974. This, at least verbal elevation from interim act to the constitution was otherwise accompanied by changes over the powers, legislative and executive of the government of the state, the effective attenuation of the state’s upper house, or shared legislative ground between Pakistan and Azad Kashmir, the Kashmir Council, chaired by the prime minister of Pakistan.

The wordplay meant more than anything to the government, which had historically raised resentments against the former Act 1974 in the masses to support their bid for office. But the amendments meant more than mere optics with political repercussions, not only from the numerically feeble opposition inside AJK but the unprecedented vocal PTI minister for Kashmir Affairs from the center. To the extent that the recommendation of the AJK chief election commissioner in January this year from the federal government cited the Interim Constitution Act, even after the amendment had changed the entire dynamic.

The recent propagation of proposed legislation that is a complete contrast to everything the AJK government has stood for has left observers wondering over the intentions of the government.
In a recent comment over the situation, former PM AJK and currently opposition representative of the state party, Sardar Attique Ahmed Khan expressed that comments on the amendment may be premature as the government has not yet managed to present it before parliamentarians and it has somehow already been disseminated publicly. But he still maintained the overwhelming possibility of the amendment in a similar fashion to be presented and the Kashmir Council to be restored to the position that the state party had maintained against the current government from the start.

However, the prime minister of AJK points to invisible hands in his recent budget address once again, on one hand distancing himself from the proposed amendments, he still exclaims that he is ready to fill in shortcomings by their former amendments. But, as elections in the region are lesser than a year away now, many speculate that with odds at the center set against PML-N, the AJK premier is once again building room for political martyrdom while covering subsequent inadequacies in implementing their own amendment.

Whether the AJK premier is playing hardball, or if he is merely displaying charismatic showmanship, it is certain that going into 2021 elections, he will need more than just flashy tricks, leaks, and invisible hands to compete with a player of similar nature running the show at the center.