Home » Blog » The difficult choice between a burger and biryani

The difficult choice between a burger and biryani

A person would prefer to take his girlfriend/spouse to a fast food chain instead of a traditional food outlet because he would feel that if he takes her to a local food outlet, his bad impression would ruin him in eyes of the woman. 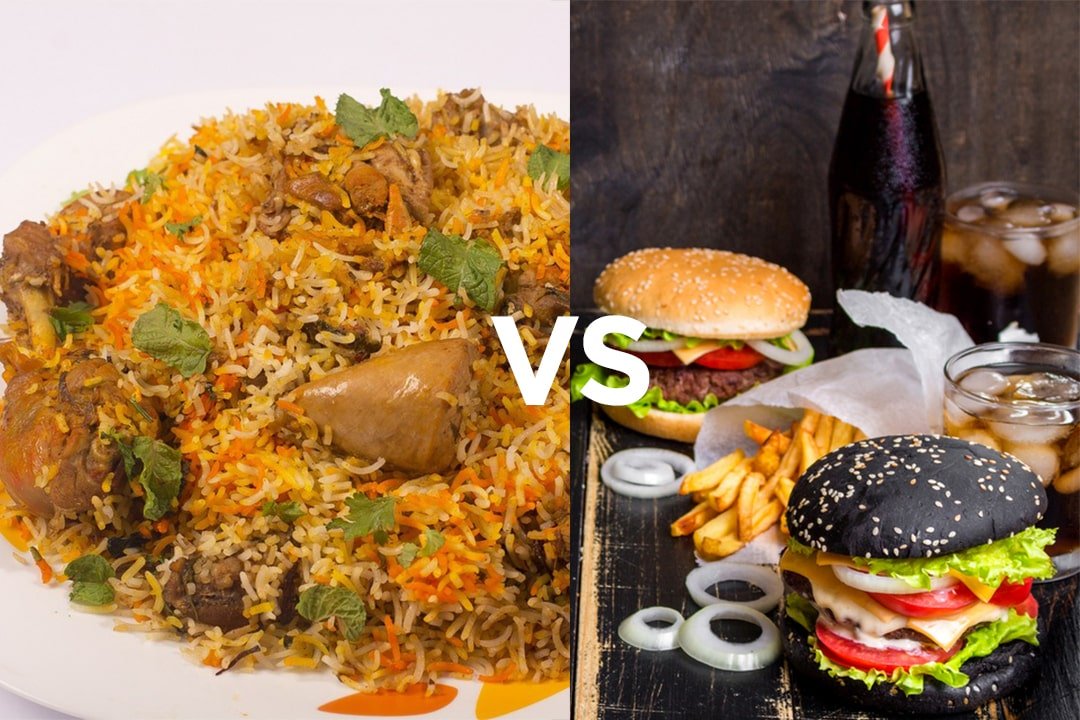 Food has always played an important role in the cultural ideology of a certain place or nation. Wherever you go in the world, each place is known for its specialty in food. The Chinese have their rice and noodles, the Indians have their spicy cuisine, the Italians have their pasta and pizza, the French have their fries, the British are famous for fish and chips and the tale of nationalities and food goes on together.

Every nation seems proud of its own food heritage and also uses its food to promote its local tourism and attract foreign tourists in great numbers. Sometimes food is the only reason for some tourists to visit a specific country.

Coming to Pakistan, no doubt our own country is world-famous for its cuisines, which sometimes are confused with Indian cuisines. Although Indian food has its own specific place in the diaries of food lovers, what distinguishes Indian food from Pakistani food is the use of meat in all types in Pakistan, including chicken, mutton, beef, and fish. Despite the fact that some Indians have opened up to the fact of eating chicken, meat remains a non-entity as far as Indian cuisine is concerned. Pakistan along with some countries of the world has a vast food market to be explored by people of all tastes. Western food and snacks were available in Pakistan at the time of its independence as a legacy of the bygone British Raj era. Brands such as Gogo and Shezan further it took forward in the 1960s while other multinational food chains entered Pakistan in the 1990s. Chinese food became popular in the early 1990s and soon became a household favorite while now we also see Mexican and Italian restaurants springing up in big cities like Karachi, Lahore, and Islamabad.

Now the major choice which an ordinary Pakistani food lover faces is the type of food he would prefer if he is not in a mood to have home-cooked food. What has happened to the mood of food lovers can be described as an identity crisis as far as picking the right choice of food is concerned. There is a general feeling that the youth prefers Western food over traditional while the middle-aged and old people would like to have traditional food if given a choice. Now if we consider the facts which lead youngsters to prefer Western food is that sometimes they feel fashion-oriented by choosing Western food or try to prove themselves as ABCDs (American Born Confused Desi), which seriously shows an identity crisis. Secondly, they feel that traditional food contains more oil and all anti-healthy stuff, which they shouldn’t consume. They ignore the fact that health problems such as obesity have been linked with fast food more than traditional food, as the calories contained in fast food are more than the local traditional food.

The youth feels that the overall environment of fast-food chains is more “cooler” than the interiors of local food outlets. The fast-food lovers should know that all these attractions are just used by fast-food chains to lure customers, empty their pockets and take all profits away, which can also be the case if the foreign franchise has been sold here to some investor. The youth also feels that fast food is less expensive than traditional food by forgetting that a single cold coffee in a foreign food outlet would cost more than a full chicken karahi, which can serve four people at a time.

Staying at the point that fast food is more expensive than traditional food, Gilgit-Baltistan Chief Minister Syed Mehdi Shah was once asked that how could inflation be controlled on which he asked people to migrate to Gilgit-Baltistan saying that there are no fast food outlets there, which would enable people to save money wasted on fast food, which they do in other big cities of the country. A person would prefer to take his girlfriend/spouse to a fast-food chain instead of a traditional food outlet because he would feel that if he takes her to a local food outlet, his bad impression would ruin him in eyes of the woman. A youngster would prefer having a fish-o-filet burger costing around Rs 400 at McDonald’s instead of trying basin-filled fish at Aslam Darul Mahi, which costs the same and can fill three stomachs at a time. The reason behind this can be that Aslam Darul Mahi is located at Mozang, which isn’t a hip-hop area for youngsters to go.

Given the above-stated reasons and logic, one can easily assess the identity crisis which our food lovers are going through. However, if the local food serving outlets attract people by improving their environment and showcasing their products in a good way, the youth can be attracted to traditional food as well. Food can serve as a weapon for winning cultural wars just as cinema is doing for many countries and without any doubt with the taste and elegance which our traditional food has, it can help us portray a soft image of Pakistan all over the world. Our food as the power to win hearts of all those who taste it then why are we losing out on this front? The next time you go out to eat something I am sure the choice between a burger and a biryani wouldn’t be as difficult as we have made it for ourselves.