Expressing his views in a programme at a private news channel on Wednesday, he said that the cabinet reshuffle was not enough and there were no concrete steps taken against the culprits. 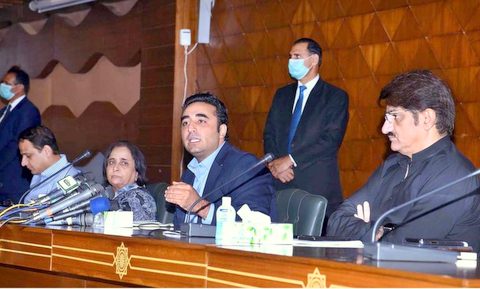 Expressing his views in a programme at a private news channel on Wednesday, he said that at this point in time when we are dealing with coronavirus a scandal like this should not have been surfaced. He further said that the cabinet reshuffle was not enough and there were no concrete steps taken against the culprits. Answering a question about the demand of the opposition parties for the resignation of the prime minister, he said that these demands were put exactly the same way when Imran Khan used to demand resignations after the issuance of the JIT report. He added that he was sure the law would take its course.

He said that he wanted the government and the opposition on the same page at this time as this was not the time to score political points.

Answering a question on coronavirus, he said that unfortunately, the government’s performance was not up to the expectations. He said the government was not cooperating with the provinces in a proper way. He advised the prime minister to hold meetings with the CMs of all the provinces on a daily basis to exchange the fresh information of the cases.

Earlier, Muslim League (N) leader Ahsan Iqbal also criticized the cabinet reshuffle and said that the move by the prime minister was just to make fool of the nation. He held the prime minister and Punjab CM Usman Buzdar responsible for the crisis and demanded their resignations. and this moe and sai that Imran Khan escapes this issue by only reshuffling the cabinet. He also said that the report had been made public for more than two days but no action was taken by NAB in that regard.

Earlier on Wednesday, Pakistan Railways Minister Sheikh Rasheed while talking to media said that Imran Khan had repeated in the cabinet meeting that he would not spare the culprits behind sugar and wheat crisis. He also said that there were no differences between Imran Khan and Jahangir Tareen. He also hinted at some grievances on the part of Jahangir Tareen but added that Jahangir Tareen will be fine soon. He added that the forensic report on the crisis that will be issued on the 25th of April would expose the actual culprits and it would be too early to hold anybody responsible for the crisis till that time.