Shah Hussain Express train that was going to Lahore had a horrible accident with a Nankana-bound coaster when both of them rammed into each other near Sheikhupura. 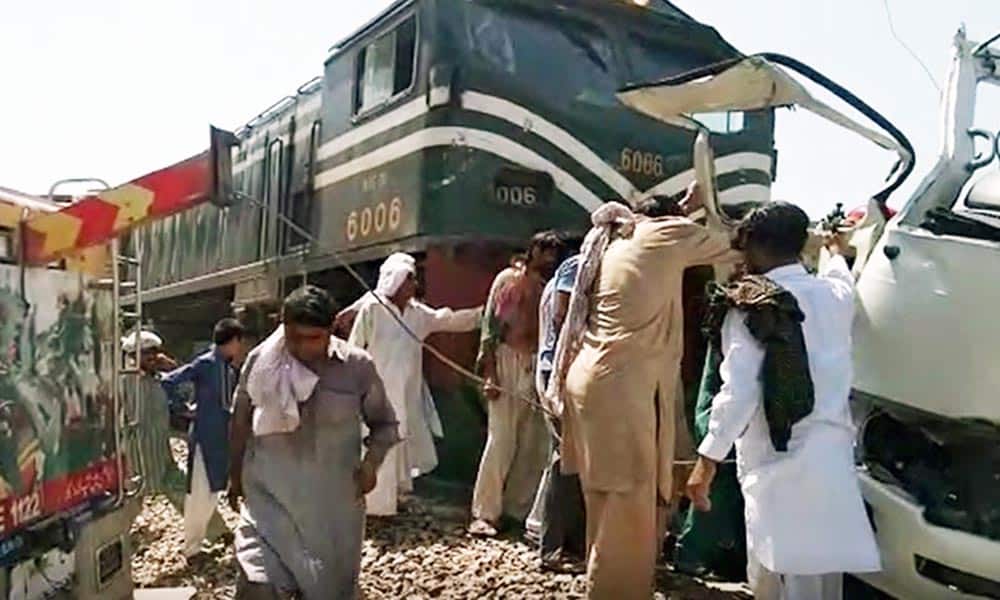 Lahore-bound Shah Hussain Express train on Friday collided with a coaster killing at least 21 members of Peshawar’s Sikh community and a Muslim driver near Sheikhupura.

According to the details, Shah Hussain Express train that was going to Lahore had a horrible accident with a Nankana-bound coaster when both of them rammed into each other near Sheikhupura.

The members of the Pakistani Sikh community were coming from Peshawar to attend a funeral there at Nankana Sahib shrine.

According to the reports, 27 members of the Sikh community along with a Muslim driver and his helper were there in the coaster when the unfortunate accident occurred near the Farooqabad Railway Station.

According to an official from Pakistan Railways, the driver of the coaster, in haste to cross the railway crossing from the unmanned area, met with this horrible accident that took 21 lives.

Evacuee Trust Property Board (ETPB) Deputy Secretary Shrines, Imran Gondal told the media that all the deceased Sikh passengers were Pakistani nationals and members of one family in Peshawar.

The same day (Friday) at 10:30 pm, ETPB Chairman Dr. Aamer Ahmed had sent the bodies of the deceased Sikhs in the C-130 plane to Peshawar from Lahore.

It was also reported that those five Sikhs who got injured in the accident were better while they were still under treatment.

Sheikhupura district police officer (DPO) said while talking to the media that the accident took place because of the negligence of the van’s driver.

He also said that the driver tried to cross the track from the unmanned area in a hurry thus got the coaster to collide with the incoming train.

Punjabi Sikh Sangat Chairman Gopal Singh also said that the driver did not wait for the railway crossing to open and tried to cross the track from some distance that caused the incident.

Prime Minister Imran Khan tweeted that he was very much grieved to hear about the accident. He expressed condolences and prayers for the families of the deceased and asked the relevant authorities to give the best possible medical treatment to the injured ones.

Deeply saddened at the accident this afternoon at a railway crossing near Sheikhupura which resulted in the death of atleast 20 people, mainly Sikh pilgrims returning from Nankana Sahib. Have directed that proper medical care be provided to the injured.

My condolences and prayers go to the families of the deceased. Have directed relevant authorities to ensure facilitation and care for all the families. Our entire railway's operational safety SOPs will be reviewed immediately.

President Dr. Arif Alvi also expressed his grieved thoughts over the death of 21 Sikhs and asked the officials to provide the best facilities to the affectees.

Army Chief General Qamar Javed Bajwa also condoled with the bereaved families for the loss of precious lives in the horrible incident. He also sent prayers for the quick recovery of the wounded ones.

The Chinese Embassy in Pakistan also issued an official statement in this regard and said that it was grieved over the unfortunate train accident.

“Our condolences and sympathies go to the victims and their families and we wish a quick recovery of the injured,” it added.

Interior minister retired Brig Ijaz Ahmed Shah expressed grief over the loss of lives and prayed for the quick recovery of the injured ones.

Punjab Chief Minister Usman Buzdar also expressed his grief and said that his prayers and sympathies were with the families of the victims.

Human Rights Minister Shireen Mazari was also shocked at the tragic accident which took so many innocent lives.

“Railway crossings both manned and unmanned need strict implementation of SOPs and PM has rightfully directed a review of all railway safety procedures,” she said.

PML-N President Shehbaz Sharif said, “I extend my most sincere sympathies to the bereaved families on their irreparable loss.”