Education Minister Shafqat Mehmood has said that schools and universities would be allowed to ask their staff to resume their services before September 15 to make administrative arrangements before the arrival of the students. 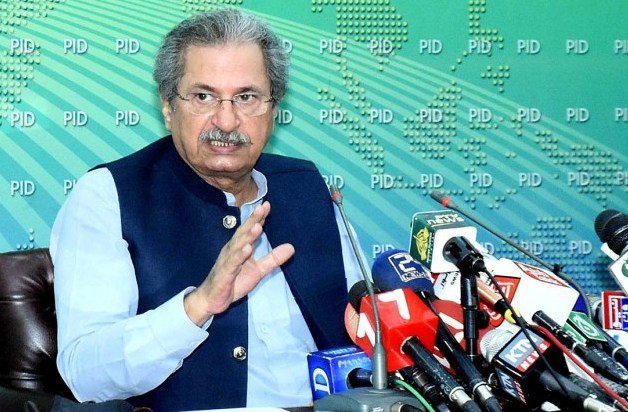 Federal Education Minister Shafqat Mahmood on Thursday announced that educational institutions of all levels across the country will be allowed to reopen after a pause of almost five-month on September 15.

According to the detail, the education minister said that after a long interval of around five months all types of educational institutes will be reopened on September 15 if “health indicators improve.

While addressing a press conference, he said that meetings and discussions will be held on this issue during this time and the decision will be reviewed in August keeping in view the coronavirus situation in the country.

He further said that if the deadly virus is not controlled and the numbers of active patients do not decline schools, colleges and universities will not be opened in such circumstances.

Explaining the matter further, he said that Eid ul Azha will be celebrated by the end of July while Ashura will be observed in the country in August, so the educational institutes would not be reopened in these months fearing the spread of the virus.

Standard operating procedures (SOPs) would be brought into being before opening the educational institutes, he said adding that a number of way outs were under government’s consideration including holding the classes on alternative days and open-air classes.

He said that schools and universities would be allowed to ask their staff to resume their services before September 15 to make administrative arrangements before the arrival of the students.

He added that the educational institutes would clean and disinfect their properties and train the faculty and staff to get the SOPs implemented by the students.

He also said that those educational institutes which would be found violating the SOPs and guidelines suggested by the government and health authorities would be shut down immediately.

The educational institutes and boards which had delayed their examinations in March would be allowed to conduct the examinations in the month of July before Eid ul Azha, he said, and added that SOPs would have to be strictly followed for this purpose.

He said that it had been proposed that the universities might allow their Ph.D. students to visit libraries for the research purposes keeping in view the SOPs and precautionary measures.

He added that for the students who had not been able to attend the online classes due to the non-availability of internet, the government would allow the universities to let them come to the hostels after Eid ul Azha so that they might make up for the loss they had suffered in their studies. However, he said that the occupancy ratio in hostels must not exceed 30 percent.

He said that SOPs would be developed at the federal level but the provinces would be allowed to make changes in them according to their situations.

Shafqat Mehmood held the press conference after the education ministers of all the provinces held an online meeting a day before and decided that educational institutions would be opened in September across the country.

It is important to mention here that the government had halted the educational activities at all levels across the country in mid-March due to the fear of the spread of the coronavirus and the school and college students were promoted in the next classes without examinations.