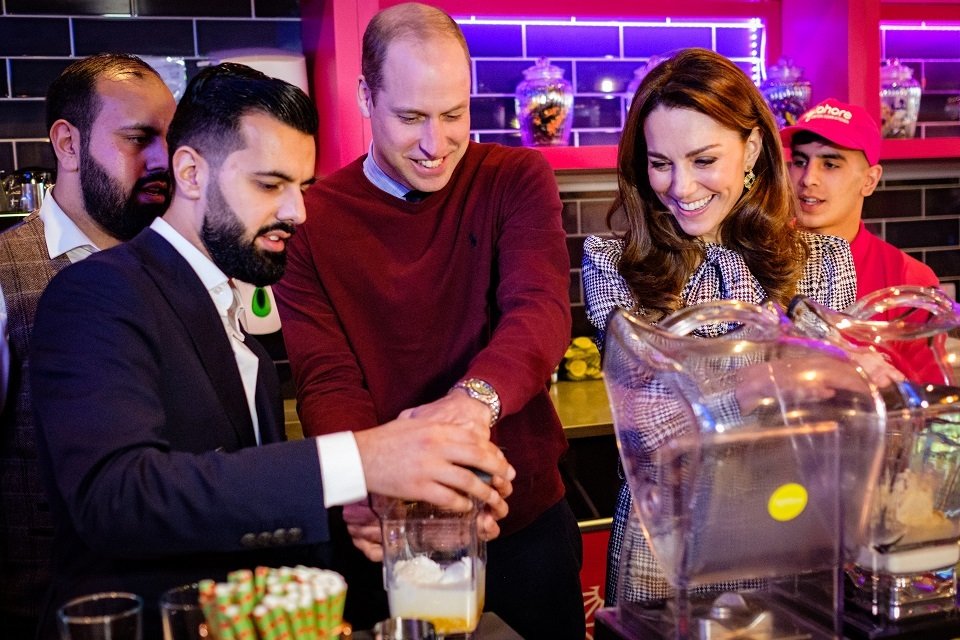 The royal couple were greeted by MyLahore CEO Asghar Ali and managing director Shakoor Ahmed with Catherine Middleton’s eyes lighting up at the sight of a fiery pan in the cooking area inside the restaurant, situated in Bradford City in the northern English county of West Yorkshire.

In the restaurant, the couple’s first stop was the kitchen where they met staff. Dawn Leak, one of the teachers leading apprenticeships, said that the opportunity to meet the royals was huge. The royals went on to make mango and kulfi milkshakes under the guidance of Ishfaq Farooq, the operations director.

Both the royal visitors chose flavours of ice cream to add to their drinks and mixed them using blenders. Prince William said that his milkshake is delicious and went on to ask staff about the origin of ingredients used. “I was watching them putting stuff on the grill. I’ve enjoyed cooking for a long time and I’ve always wanted to work in the kitchen,” said Jack Johnson, a 17-year-old from Ravenscliffe.

MyLahore donates meals to their Curry Circle which helps support the homeless – many of whom struggle with their mental health. Keith Marsden, one service user, told how he arrived in Bradford homeless, jobless and “as low as you can get.” He said, “it gave me the confidence to pick my life up again.”

Today, MyLahore is an iconic multi-site restaurant and catering business that employs over 450 people from around 27 different nationalities. It is still family-run and has restaurants in Bradford, Leeds, Manchester, Birmingham with London coming soon. Inspired to build on the pioneering migrant spirit of generations that came before them, community and togetherness have always been at the heart of MyLahore.

MyLahore menu is famously diverse, with something for everyone, offering up tastes of adventure as well as strolls down memory lane. In Yorkshire, MyLahore is rooted in a world of small kitchens where families tuck into everything from samosas to shepherd’s pie, and karahis to cornflake tarts – it’s a very British Asian story that just had to be shared.

Group’s CEO Bana Gora said that she is hopeful the event will boost Bradford’s chances to win the 2025 city of culture bid in 2025. Before leaving, the couple enjoyed a private, freshly cooked meal upstairs. The royals were served a mixed grill, chicken and mixed veg options among other treats.

The Duke and Duchess of Cambridge arrived in Bradford to cheers from well-wishers on Centenary Square. During their visit to Bradford City Hall, the royal couple looked relaxed as they spoke with young people about life in the city, and with local employers helping youngsters to get jobs.

British High Commissioner to Pakistan Dr Christian Turner said that the City of Bradford is home to thriving and diverse communities making huge contributions to modern British life including a large Pakistani diaspora. The visit of the royal couple to MyLahore is one example of this which showcased not only great Pakistani food but a great business.