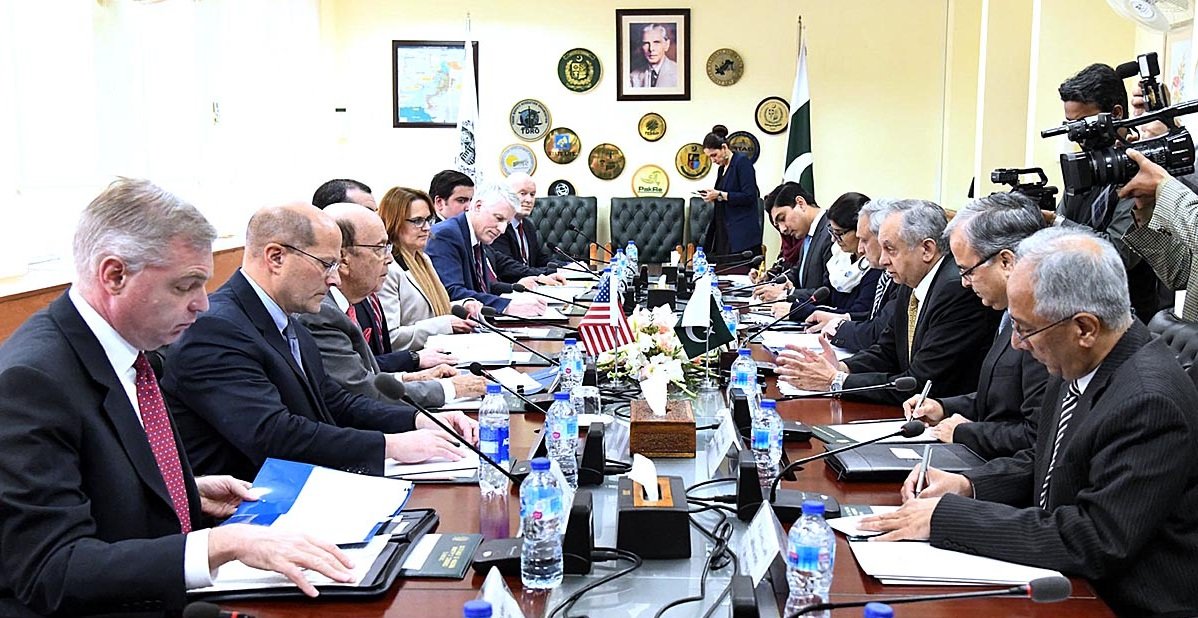 Adviser on Commerce, Textile, Industries and Production and Investment Abdul Razak Dawood in a meeting with US Commerce Secretary Wilbur Ross along with his delegation in Islamabad.

Adviser to Prime Minister on Commerce, Industries and Production and Investment Abdul Razak Dawood has said that this is high time for American companies to invest in Pakistan for increasing bilateral economic and trade relations.

He told a delegation in Islamabad that after achieving economic stability, the federal government is now focusing on job creation and export augmentation by encouraging foreign investments. During a meeting with US Secretary of Commerce Wilbur Ross, the adviser discussed the issues related to bilateral trade and enhanced market access to Pakistan.

The American secretary’s visit is the outcome of recently-held discussions of Prime Minister Imran Khan and President Donald Trump to promote bilateral trade and enhanced economic engagements. The adviser also took up the issue of the early convening of the long-awaited ninth session of Trade and Investment Framework Agreement (TIFA) meeting.

He discussed the visit of US business delegation to Pakistan to participate in the business opportunities conference in order to forge better networking among the private sectors of both the countries. The adviser also suggested that the US International Development Finance Corporation (IDFC) should help in developing of new businesses in Pakistan.

On the occasion, Wilbur Ross said that his visit to Pakistan was a part of his government’s desire to increase trade relations with Pakistan. He believed that such links between the two counties would not only enhance trade but encourage further expansion of ties in all fields of economic engagement.

About IDFC assistance, he sounded positive and suggested that the Ministry of Commerce should propose projects in that regard. In a separate meeting, Minister for Energy Omar Ayub Khan gave an overview of Pakistan’s energy sector and the government’s earnest endeavors in reforming this sector.

He called for greater US investment in the energy sector including areas such as power generation, transmission, and distribution, artificial intelligence, renewable energy, hydel energy, and training opportunities. He reaffirmed Pakistan’s commitment to cleaner fuels and green energy.

Special Assistant to Prime Minister on Petroleum Nadeem Babar informed the visiting side on key actions taken to improve ease of doing business in Pakistan. He shared how more US investments could be incremental in improving the business relations between Pakistan and the US. The two sides agreed to step up cooperation in the energy sector.

Addressing a press briefing in Islamabad, Abdul Razak Dawood said that Pakistan desired market access to the United States and its investors to increase their investment in this South Asian country. “We also prioritize for increasing our exports to achieve the objective of exports-led growth besides enhancing the bilateral trade with the US,” he said.

He said that Pakistan is committed to acquiring the US Generalized System of Preference (GSP) program, which provided nonreciprocal, duty-free tariff treatment to certain products imported from designated beneficiary countries. As part of ongoing efforts to create jobs and economic growth on both sides, he said that the two countries had held regular consultations in May under the Trade and Investment Framework Agreement (TIFA).

The adviser said that Pakistan and the US also discussed ways to enhance the American investment in energy, oil and gas, agriculture, food processing and e-commerce besides increasing trade in agricultural goods and medicines. He said that this is high time for the American companies which invested in Pakistan for increasing bilateral economic and trade relations.

He said that the US also agreed to improve the travel advisory for Pakistan for bringing mega brands and the US investment in different sectors to Pakistan to create employment opportunities. He hoped that Pakistan would achieve trade benefits from GSP-Plus provided by the European Union for 10 years till 2023. He said that Pakistan wanted to get access to the potential markets of the African region, Russia and North America for enhancing trade liberalization to achieve the objective of export-led growth.