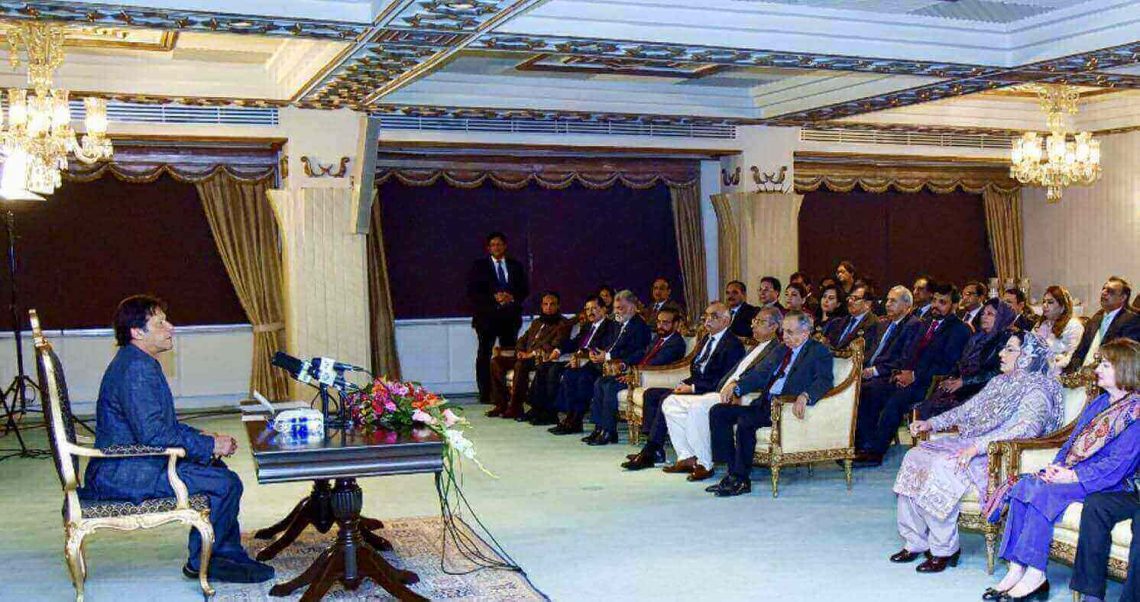 Prime Minister Imran Khan has urged the Federal Board of Revenue (FBR) to devise reforms which could restore people’s confidence in tax machinery, besides enhancing their performance coupled with easy tax payment system.

Addressing a gathering of taxmen in Islamabad, he stressed that revenue and tax collection are key drivers for the economic stability, and the Federal Board of Revenue had a significant role in that regard. He said that the countrymen are generous in charity giving, but avoid paying taxes.

The prime minister assured the FBR officials that they would be fully taken on board on tax reforms as their role had been crucial in the country’s economic stability. He said that Pakistan had been at the historical crossroads and his government is committed for reforms in the revenue and tax systems.

He said that the government through its holistic approach had been introducing all bracing reforms, with exports witnessing a surge and the stock exchange gaining momentum. He expressed his satisfaction over the country’s enhanced performance in the ease of doing business as its business outlook had been enhanced by seven percent.

He said that collection of eight trillion rupees tax was not difficult, unless all the stakeholders considered it as their national responsibility and sacred duty to work for the achievement of that task. He said that the tax collection during the fiscal year was targeted at Rs 5.5 trillion.

The prime minister observed that if steps for the collection of enhanced tax were not taken, it could give rise to complications in the future as those were also vital for the human resource development. He said that Pakistan had huge potential in terms of its young population and if they were provided with opportunities, the country could move forward.

Imran Khan said that the China-Pakistan Economic Corridor had entered into another phase, which would spur industrialization and business opportunities across the country. He cited example of the Scandinavian countries including Sweden and Norway where the people had been paying taxes as they knew that the same were spent judiciously on their welfare.

He said that a woman in Sweden could not contest for the prime minister’s office as she had spent the public money. In Pakistan, he said that the past rulers took it as their prerogative to spend the public tax money on their personal requirements. He said that his government cut down Rs 350 million expenditures of the PM House, besides the centre’s expenditures were slashed by Rs 45 billion.

He said that there was also a ban on traveling of ministers abroad. The prime minister said that the government entities, including the governor houses, were being converted into the public places, thus bringing down their expenditures and cited the Governor’s House in Murree where a sum of Rs 830 million alone was spent in the past over its renovation.

He expressed the resolve that his government would spend the public money on the welfare and uplift of the public. He said that his recent Washington visit cost $65,000 as compared to previous visits by Asif Ali Zardari and Nawaz Sharif, who spent $0.8 million and $0.7 million respectively.

During the UN visits, Asif Ali Zardari spent $1.2 million, Nawaz Sharif $1.1 million and Khaqan Abbasi $800,000 whereas his visit cost ‘only’ $160,000, he said. A huge amount of Rs 50 billion was spent on advertisements by the previous rulers from the public tax money, he added.

He said that the nationalization policy of ’70s had also impacted the growth rate of the country in which wealth creation was considered as an offence. He said that the government was determined to provide a business-friendly climate through ease of doing business.

He also credited the overseas Pakistanis, who had been the biggest asset of the country sending remittances regularly thus strengthening the national economy. The prime minister responded to various queries and suggestions by the FBR officials.

He underscored that Pakistan’s investor-friendly policy provided no restriction on remitting capital, profits and dividends. He said that the government welcomed the interest of Shell in new projects and hoped that the company would keep investing in Pakistan for achievement of mutually beneficial targets of economic development.

He said that Shell was one of the oldest multinationals in Pakistan and had been present in the South Asian region for over a century. Underlining the importance of renewable resource of energy, he urged the Shell to invest in these areas, since it had achieved a major breakthrough in this sector.

James Hall said that Shell has its footprint in Pakistan since the time of its independence in 1947 and has been privileged to play a vital role in the country’s progress. Right from the largest natural gas discovery at Sui in 1952 to the launch of the Retail Visual Identity stations in 1995 that changed the face of fuel retailing in Pakistan, Shell has been a dedicated energy partner in the country, he said.

“We are making a paradigm shift in our strategy by implementing a structured convenience retailing model for our customers across our service station network, which will be another milestone for Downstream in the country,” he said, adding that Shell was committed to working with the government, sharing insights in energy transition and transitioning to a low-carbon future, building a sustainable energy future for Pakistan together.