Partial lock-down extended across the country 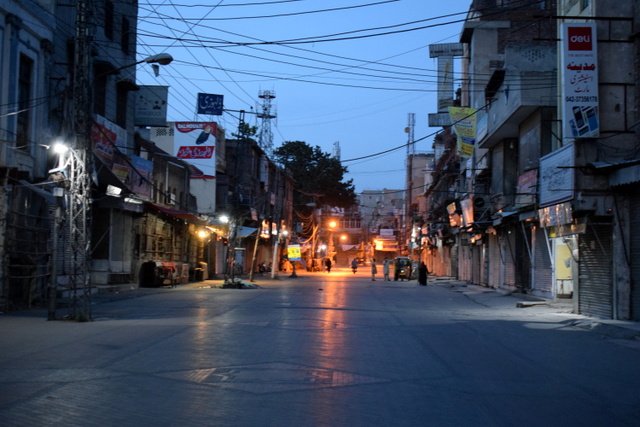 Lock down in Pakistan - Photo by Minhas Justin

Prime Minister Imran on Tuesday announced to extend the partial lock-down all over Pakistan including Azad Kashmir.

In a press briefing here on April 14, the prime minister with his team announced to extend the partial lock-down in all the provinces, Islamabad and Azad Kashmir till the 30th of April. The decision was taken to prevent the increasing numbers of coronavirus patients.

The prime minister said that the decision to extend the partial lock-down was done after consulting the chief secretaries and chief ministers of all the provinces and other authorities. He added that after the 18th amendment the provinces were independent in their decision and the center would not insist on any such thing that any province did not want to do.

Talking about the arrival of Ramzan, he said that he had planned to talk to the religious scholars to formulate some strategy to lessen the effects of coronavirus during Ramzan.

He also said that there were two big challenges the government was getting ready to deal with. He feared the smuggling of wheat and dollars and the hoarding of food items prior to Ramzan however he warned the smugglers and hoarders of strict action as well.

Special Assistant to Prime Minister on Health Dr. Zafar Mirza, upon the request of the prime minister, briefed the public about the current situation in the country due to coronavirus. He said that since the beginning of the outbreak in the country above 51000 people had been tested for coronavirus and out of 5716 were tested positive while 96 people had died by then. He added that the situation in Pakistan was less critical as compared to the rest of the world and that was all due to the good decisions made by the government.

Planning, Development and Special Initiatives Minister Asad Umar, after getting a signal from the prime minister, talked about the unanimity of the decisions between the center and the provinces. He said that 98% of decisions were unanimous across the country including Azad Kashmir. He further said that National Coordination Committee, comprising the prime minister and all the chief minister besides other relevant authorities, had held nine meetings since the beginning of the corona outbreak.

Federal Minister for Industries and Production Hammad Azhar, upon the request of the prime minister, talked about the reopening of the industries. He said that low-risk industries including construction, chemicals, eCommerce, software houses, paper manufacturing units and other industries where staff stays within the premises would start working immediately.