The moon passes between the sun and the earth during annular eclipse; meteorologists confirm total eclipse from 8:37am till 11:58am 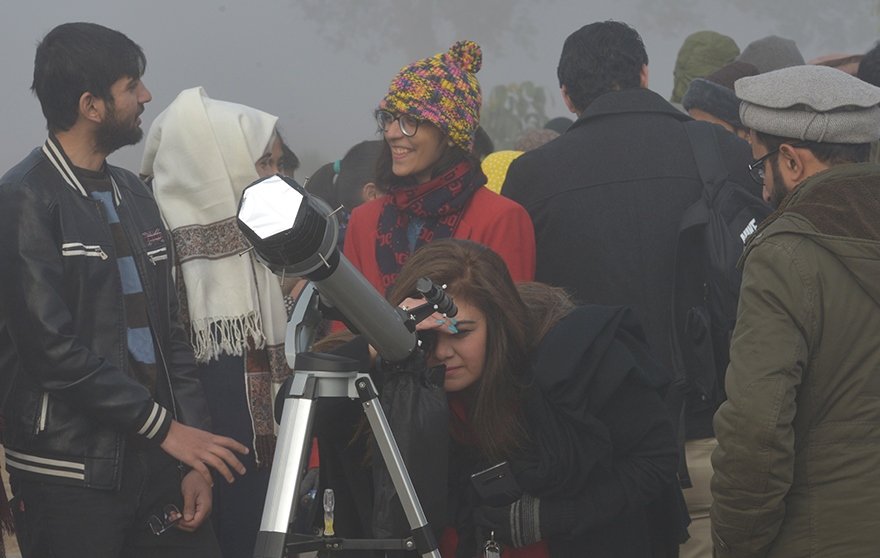 People watching the solar eclipse through a telescope in Islamabad

Like other parts of the world, Pakistan also witnessed rare ‘ring of light’ solar eclipse on Thursday morning after 20 years, as the moon passes between the sun and the earth.

According to meteorologists, annular eclipses occur when the moon is not close enough to the earth to completely obscure the sun, leaving a thin ring of the solar disc visible. These eclipses are only visible from a narrow band of earth each time and it can be decades before the same pattern is repeated, they said.

Annular eclipse of the sun was visible from Eastern Europe, much of Asia, North and West Australia, Eastern Africa, Pacific Ocean and Indian Ocean. In Pakistan, the official said that the maximum partial eclipse of 0.77 magnitude was visible in Karachi at 8:46am, 0.49 magnitude in Islamabad at 8:58am, 0.64 magnitude in Quetta at 8:48am, 0.50 magnitude in Peshawar at 8:56am, 0.52 magnitude in Lahore at 8:58am.

The official also confirmed 0.43 magnitude eclipse in Gilgit at 9:01am and 0.47 magnitude in Kashmir at 8:59am. The assistant meteorologist said that a total solar eclipse occurs when the moon passes directly between the earth and the sun, completely blocking the sun’s light. During the eclipse, the moon does not completely cover the sun as it passes, leaving a glowing ring of sunlight around it.

An annular eclipse can only occur under specific conditions under which the moon must be a new moon, meaning it is in its first lunar phase, according to NASA. The moon must be further away from the earth on its elliptical orbit, appearing smaller in the sky than it usually would. The smaller moon cannot fully eclipse the sun so a ‘ring of fire’ or ‘ring of light’ is formed.

The next annual eclipse in June 2020 will be visible to a narrow band from Africa to northern Asia. The following one in June 2021 will only be seen in the Arctic and parts of Canada, Greenland and the eastern parts of Russia. The space lovers across the world watched the eclipse online while the sky-watchers watched it through wearing solar eclipse glasses to avoid any harmful impact of radiation.