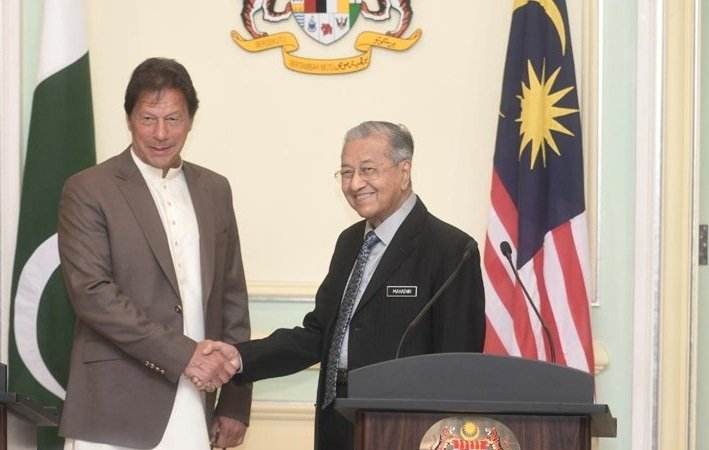 To build a strong economic partnership, Pakistan and Malaysia have agreed for regular discussions to strengthen trade and investment relations by removing barriers in key areas.

Addressing a joint news conference, Prime Minister Imran Khan thanked Mahathir Mohamad for the standing by Pakistan on Kashmir and speaking against the injustices being perpetrated by Indian forces in the disputed state.

He said that a very radical and extremist government has taken over India which has put the Kashmiri people in an open prison. Delegation level talks between Pakistan and Malaysia also held at Putrajaya. Prime Minister Imran Khan led the Pakistani delegation while the Malaysian side by its Prime Minister Mahathir Mohamad.

The two sides discussed the entire spectrum of bilateral relations and ways and means to further expand their relations in different fields including trade, economy and tourism. On his arrival at the Prime Minister’s office, Mahathir Mohamad accorded a warm welcome to Prime Minister Imran Khan.

Malaysian Minister for Defence Mohamad Sabu and senior officials of the Malaysian government received Imran Khan at Kuala Lumpur International Airport. Imran Khan will also address a think-tank event organized by the Institute of Strategic and International Studies of Malaysia.

Islamabad and Kuala Lumpur enjoy dynamic economic cooperation since signing of the Malaysia-Pakistan Closer Economic Partnership Agreement (MPCEPA) on November 2007. It encompasses liberalisation in the trade of goods and services, investment, as well as bilateral technical cooperation and capacity building.

Since establishing diplomatic ties in 1957, the two nations have also shared warm and cordial relations and have worked closely in many areas, including at international fora such as the United Nations, Organisation of Islamic Cooperation and Non-Aligned Movement. With a large diaspora of Pakistan nationals in Malaysia, both the countries also share great people-to-people relations.