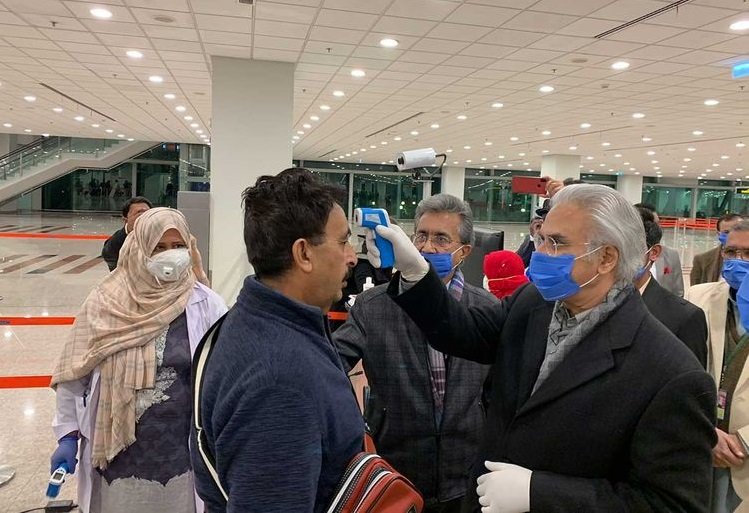 National Security Committee decides closure of Western border with Iran and Afghanistan for two weeks along with all airports except Islamabad, Lahore and Karachi for international travel.

The National Security Committee (NSC) set up a decision-making National Coordination Committee to effectively curb the spread of coronavirus by evaluating the situation on a day-to-day basis, according to the official statement issued in Islamabad by the Press Information Department.

Chaired by Prime Minister Imran Khan, the key committee decided closure of educational institutions for three weeks, ban on public gatherings, and complete shutdown of the Western border with Iran and Afghanistan for two weeks along with all airports except Islamabad, Lahore, and Karachi for international travel.

They said that the committee had a thorough discussion on the evolving situation in the wake of new coronavirus cases, taking the tally of confirmed ones to 28 and resolved to ensure public safety.

The committee would be authorized to include any other stakeholder if needed, he said, and added that it would hold its maiden meeting on Saturday at 4:30 pm. He said that the evolving situation demanded to form such a high-level body so that the pandemic could be curbed through coordinated efforts after taking unanimous decisions at the national level. The National Disaster Management Authority (NDMA) would be the lead operational agency with the required funds at its disposal.

He said that the government and the opposition should sit together to discuss the issue and find out a solution to control it which had already affected other parts of the world. He said that the opposition would not do politics on the issue of the coronavirus, as they are ready to sit with the government to discuss the solution of the issue. He also said that coronavirus might bring a negative impact on Pakistan’s economy.

On Twitter, Minister for Federal Education Shafqat Mahmood said that all academic institutions will be kept closed until April 5. He said that the institutions include all schools, colleges, and universities, both public and private as well as vocational institutions and seminaries. During the assembly session, he said that 22 confirmed cases of coronavirus had been reported so far.

He said that screening of coronavirus had been put in place at all the airports and about one million had been screened by the authority. “We are aware of the sensitivity of the issue and the government is taking all possible steps to control the coronavirus.” He said that the government is well-prepared to prevent the deadly disease with all-out preparations to provide necessary treatment if anyone is found infected.

About education institutions, the minister said that the coronavirus situation in the country is not ‘serious enough’ that schools need to be closed. About not bringing back Pakistani students from China, he said that it is a difficult decision, but it had been taken in the best interest of the country. He said that the Chinese government had advised Pakistan not to take back students from the affected province as China had provided all possible assistance and medical care to them.

He said that an emergency had been declared in Punjab while the Sindh government had announced to close schools and universities in the province as preventive measures. He said that he had discussed the issue with the representative of Britain as the British government had not closed schools and universities. “We have taken all necessary steps to control the virus and I assure the House that the issue would be dealt in an effective way.”

Former prime minister Raja Pervaiz Ashraf said that the state of emergency should be declared and a comprehensive awareness campaign should also be launched in the country. He endorsed the proposal of calling a joint session to discuss the latest situation. MNA Ameenul Haq also asked for declaring state emergency to prevent the spread of the disease.

Separately, Parliamentary Secretary for National Health Services Nausheen Hamid said that the Health Ministry is closely monitoring and taking special measures to tackle coronavirus. As part of prevention measures, she asked travelers for self-isolation and avoid public gatherings after they traveling one country to another. She said that travelers from affected countries are being asked to monitor their symptoms for 14 days after their return.

In a news release, it said that the companies, manufacturing and distributing products, including medicines and personal protective equipment, are increasingly strained as production and distribution ramp-up to address the deadly disease. Bank’s Head of Trade and Supply Chain Finance Steven Beck said that the support will target companies in the supply chain that are critical to fighting the virus.