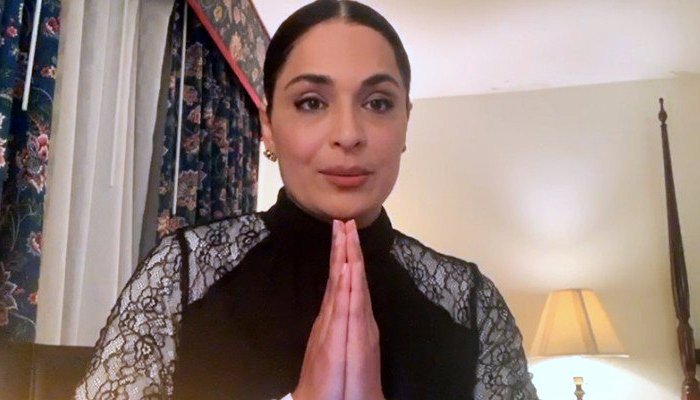 Meera, a veteran Pakistani actress who has always been in news for her different acts of amusement, grabbed the attention of the media again when she sought Prime Minister Imran Khan’s help on Monday for coming back to Pakistan from New York, America.

According to the details, Pakistani actress Meera who went to New York at the start of March for the shooting of a film and other programs has got stuck in the city due to the imposed lock-down and other restrictions.

In her video message on April 20, she shared her problem with everyone out there and also appealed Imran Khan for help.

She started her video message by addressing Prime Minister Imran Khan that it was 02:00 am in New York and she was imprisoned in the room of a hotel.

She conveyed it to the prime minister that she along with Humayon Saeed and other artists went to New York for the shooting of a film and doing some shows. She further said that all her colleagues had gone back to Pakistan but she got stuck in the city.

She also said that she had no savings and it was difficult for her to survive there in the city anymore.

She said that New York was looking like a graveyard and thousands of people were dying of the coronavirus on a daily basis. She also said that everybody has to die but she did not want to die in a foreign country. She also reminded the prime minister of the fact that he had always been very kind and supportive to the artists of Pakistan.

She added that all the countries in the world were getting their citizens back to their homelands in this difficult time.

At the end of her video message, literally with sorry hands, she requested Prime Minister Imran Khan to make arrangements for her return to Pakistan and wished to die in her own country.

The emotional appeal of Meera to Imran Khan has already gone viral on youtube and people are waiting for any response from the government now.

Earlier, in another video message regarding coronavirus pandemic, she said “Coronavirus is a virus that has gone to become a pandemic across the world. The cause of this is behind the lack of hygiene practices in vet markets across China. A solution to this would be halal eating and sanitation which would prevent this kind of behavior.”

According to the media reports, during her stay in America, she also met an accident in New York however she got better after her treatment at a hospital in New York.

Meera debuted for Lollywood in 1995 and has some wonderful movies and dramas on her credit. She got Pride of Performance Award by the Government of Pakistan in 2012 and still continuing to serve the country with her artistic skills. She is also one of those actresses who have worked for Bollywood. In recent years, she has got fame for her craze for speaking in English. Comedians in several comedy shows are often seen mimicking her in order to make people laugh.