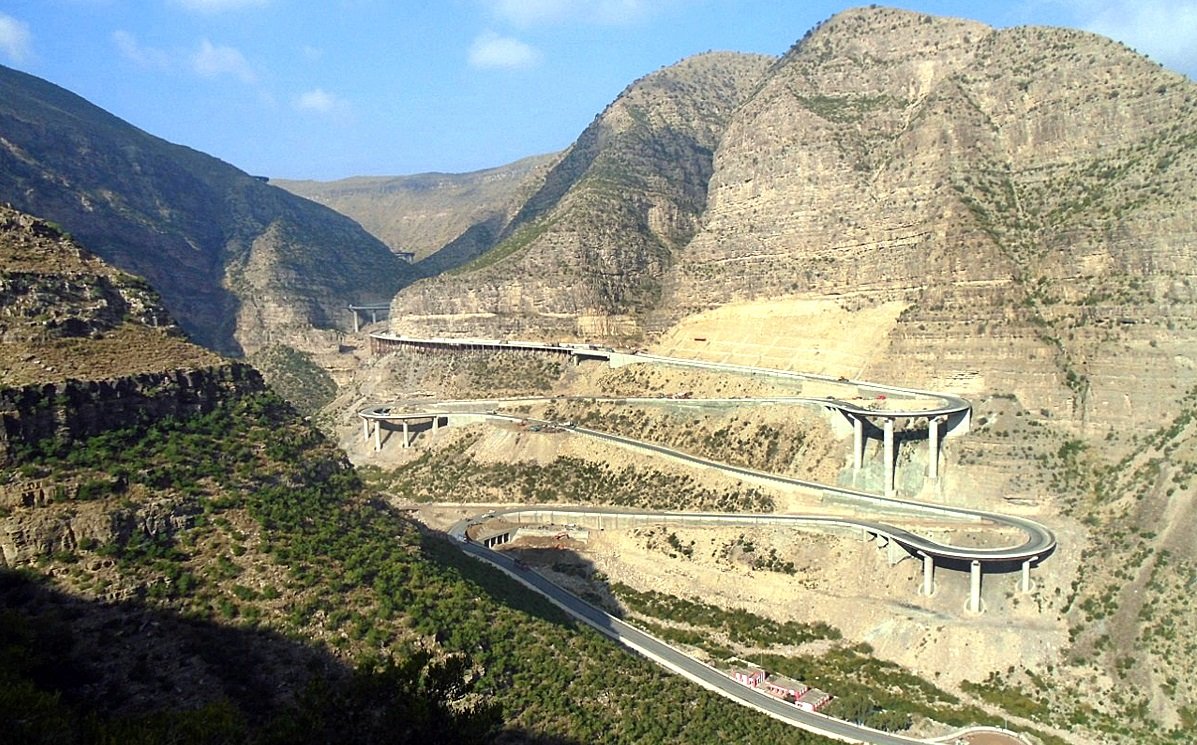 An amazing combination of steel bridges that cut through magnificent rocky Suleman Mountain Range as a marvel of Japan’s architecture and engineering technology has started supporting inter-provincial and cross-country traffic through Dera Ghazi Khan-Fort Monroe segment of the National Highway (N-70).

The mind-boggling exercise to decorate the difficult most topography of the mountain range with the steel box girder bridge began back in July 2016 with 142 million dollars funding from the Japan International Cooperation Agency, as a concessional loan at mark up of 0.2 percent payable in 40 years with a 10-year grace period.

Officials said that the formal inauguration is likely to be held in April before the start of the month of Ramazan. During a visit to the project site, First Secretary at Japan Embassy Teruki Hanazawa, who is also deputy head of economic and development, said that it looks glorious symbolizing Pak-Japan friendship and the support of the people of Japan to the people of Pakistan.

The diplomat, accompanied by a consultant Naoka Kogure and journalists, also visited a middle school at Baseera in Muzaffargarh for the inauguration of its building that was completed recently with Japan’s Grant Assistance for Grassroots Human Security Projects (GGP) amounting to $88,355.

Project Director Hafeezullah Buzdar briefed the visitors about the steel bridge project, saying that the challenging assignment was completed in a record three-year duration at over Rs 13 billion costs and was supporting traffic from Balochistan province besides cross-country traffic.

The N-70 is a 450km main artery connecting Punjab and Balochistan from Qila Saifullah to Multan and an 11.5km Rakhi Garj to Bewata section, near Fort Monroe hill station of South Punjab, was a major traffic bottleneck that had been bothering the motorist since long and resolved finally after the state-of-the-art seven steel bridges were erected.

The Japanese technology masterpiece was built with box-shaped girders made of weather-resistant special steel that can be maintenance-free for 75 years and special embankment wall strengthened with light and strong materials to avoid land sliding. Girdo More on DG Khan-Fort Monroe road was the most troublesome turn to negotiate particularly for trucks who used to apply handbrakes to let the traffic from opposite directions pass and then move on.

Engineers had to build work stations and for dangerous turns, the likes of Girdo, they moved a bit away from the rock and installed bridges with strong pillars to support. Now the single-track road has been expanded to double-truck and sharp curves with a radius of eight meters have been enlarged to 30 meters enabling convenient traffic flow with steep hills on one side and the fearsome depth on the other.

As a result of the project, heavy-weight trailers can be passing with over 40km/h, which would promote smooth transportation between the east and west of the nation. NHA South Construction Director Sulait Ahmad said that N-70 has emerged as a preferred route for commuters between Balochistan and Punjab after the construction of the bridge.

He said that NHA stations are active in Balochistan and Sakhi Sarwar in Punjab to check the weight of the heavy vehicles to avoid overloading. The bridge has a life span of 100 years but can last longer, he said. People believed the bridge would be instrumental in accelerating economic activities and promoting tourism to Fort Monroe and other scenic and historical spots Suleman Mountain Range is known for.

Later, Teruki Hanazawa and Naoka Kogure inaugurated the new building of a middle school of the Health-Oriented Preventive Education (HOPE). The school organizers said that students’ strength has increased by 23 percent and risen to 283 including 150 girls after the construction of a new building. In addition to education, the students are being trained on tailoring and embroidery.