LRU Chairman Aamir Qureshi recently held a press conference along with other business unions’ leaders in Lahore and announced that they would march towards PM House on July 18 for the reopening of the restaurants. 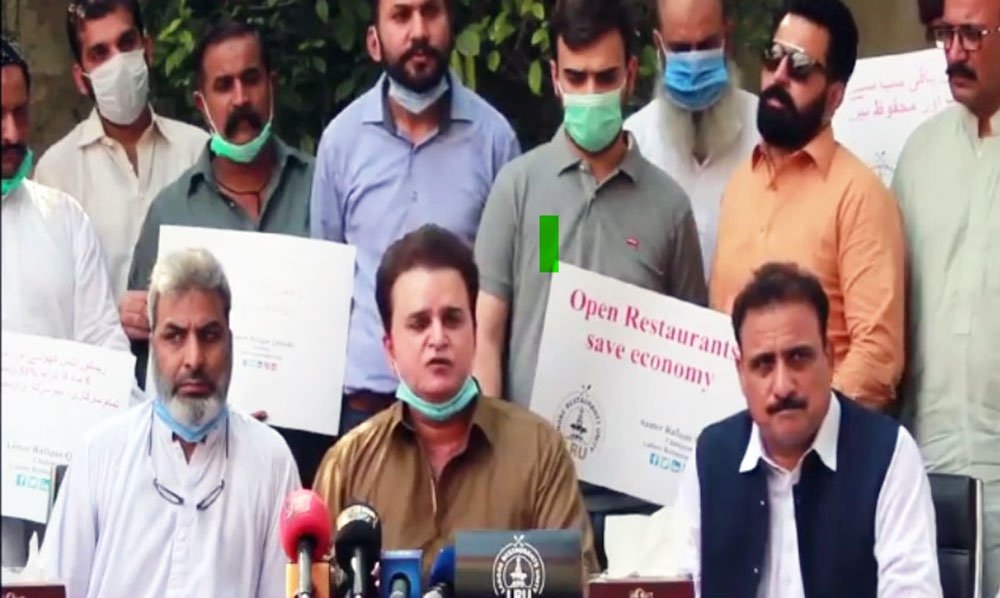 Lahore Restaurants Unity (LRU) has announced to march towards the Prime Minister (PM) House on July 18 for the fulfillment of their demands.

LRU Chairman Aamir Qureshi recently held a press conference along with other business unions’ leaders in Lahore and announced that they would march towards PM House on July 18 for the reopening of the restaurants.

He said that the government verbally claims to follow the model of Riast e Madinah but its actions do not complement its claims.

He also said that poverty can never be alleviated by giving alms to the poor people; it is uprooted by doing justice with the people but it is very unfortunate that no justice can be observed in the current scenario in Pakistan.

He exclaimed with wonder “dinners and lunches are being arranged in PM House and ministerial lounges; Punjab government is arranging meetings in the halls where marriage functions are arranged.” “What type of justice is this?”, he questioned the government.

He expressed his support with business union leader Naeem Mir and said that LRU would fully support their march towards Islamabad.

He said that the only way out that may be effective in these circumstances is “Horn Bajao. Haoomat Jagaao” movement.

He also said, “if the government still does not allow the restaurants to resume their operations, I fear the people associated with this sector may go for collective suicides.”

He said that everybody including restaurant owners, staff, and catering manpower is very much worried in this situation as there means of livelihood are closed for the last four months.

He also said, “almost every sector and industry in Pakistan is working right now but I don’t know what troubles the government for not opening the restaurants.”

He repeated that the reason due to which the government is not allowing the restaurants to reopen is neglected in their own gatherings. If restaurants are not allowed to arrange a function even with SOPs, why the dinners are arranged in PM House then?

This is sheer injustice with the restaurant owners who are unable to bear the losses now, he said adding that we protest against this prejudice of the government for the restaurant industry.

He also said that this matter has gone beyond limits as people are taking to roads now; they are forced to sell their properties and equipment; even many of them have permanently closed their restaurants due to this lockdown.

“We have recorded our protest at every reasonable forum but the government is not taking it seriously. Now, after all the disappointment, it is our final decision to take to the roads against the unjust policy of the government regarding the restaurant industry”, he added.