While addressing the parliament on Monday, he paid tribute to the intelligence agencies of Pakistan and said that defeating the prepared enemy is a big victory on the part of Pakistan. 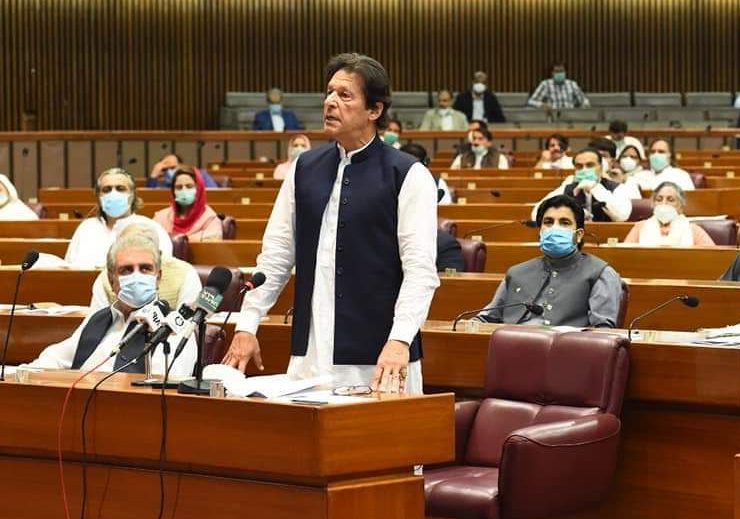 Prime Minister Imran Khan has paid tribute to the martyrs of the Pakistan Stock Exchange incident and blamed India for this cowardly attack.

While addressing the parliament on Monday, he paid tribute to the intelligence agencies of Pakistan and said that defeating the prepared enemy is a big victory on the part of Pakistan.

This attack was designed on the patterns of Mumbai attacks, he said reiterating that there is no doubt that India is at the back of this attack.

This attack was designed on the patterns of Mumbai attacks, he said reiterating that there is no doubt that India is at the back of this attack. #StockExchangeAttack #ImranKhan pic.twitter.com/sScFEsnIO6

Talking about the 2020-21 budget, he said that this was the most difficult budget in the history of Pakistan.

He said that the option of smart lockdown proved to be the right decision by the end. He said that my government was pressurized to go for complete lockdown but now the world has accepted that our decision was right according to the situation of Pakistan.

He also appreciated the Ehsaas Emergency Cash Programme team and its in-charge Sania Nishtar for distributing a huge amount in such a transparent way.

He said that loss-making government corporations are a big threat to us right now and we need to bring drastic changes in these corporations.

The future of Pakistan is industrialization, he said and added that we need to promote our businesses and agriculture so that our businessmen and farmers may make money but they should pay taxes in return.

He said that the sugar industry avails the subsidy of Rs 29 trillion but pays only Rs nine trillion as tax.

He said that the situation is quite the same in almost every sector here in Pakistan and it is the mission of my government to uproot this corruption.

He said that why everybody in the government owns sugar mills; it is because they change their black money into white one with the help of these sugar mills.

We shall go after these looters and corrupt mafias and start sugar like inquiries in every sector to free these sectors of corruption.

Pointing out Khawaja Asif, he said that he and his party are liberally corrupt as they have damaged the reputation of Pakistan at every foreign forum.

He acknowledged the doctors and all the front-liners who are working against this pandemic under immense pressure and said that the government would always stay at their back in this difficult time.

He said that the leadership of this country had been usurping the morality of the people by continuously lying to them. He said that the governments are not powerful but God. He advised his parliamentarians not to fear losing power as it only belongs to God.

He said Bilawal Bhutto is asking for a complete lockdown because he does not know the problems of the poor. He also said that Pakistan is a gift of God and because of its strategic relationship with China, we shall be an example for the rest of the world.