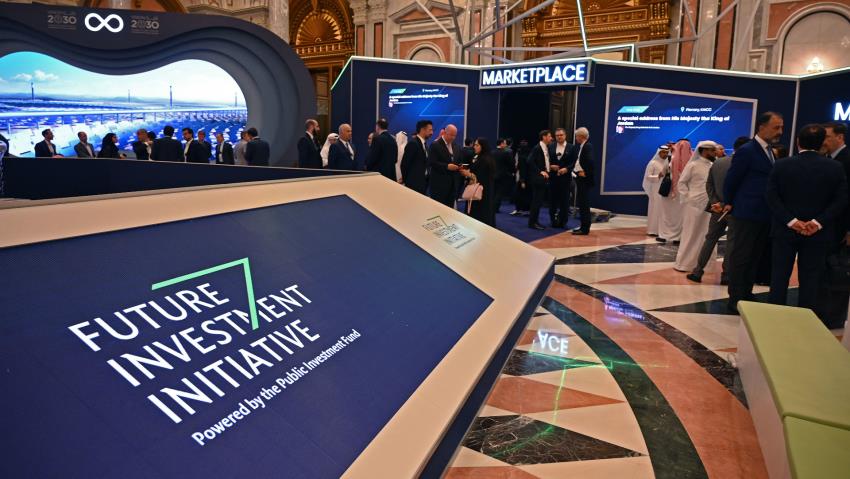 Saudi Arabia has signed over two dozen investment deals worth $15 billion, mostly in the manufacturing sector, as the world’s financial royalty attended the Future Investment Initiative (FII) conference at the Ritz-Carlton hotel in Riyadh.

On Tuesday, the bosses of HSBC, Blackstone, BlackRock, Colony Capital, and Evercore were among the crowd at the luxury hotel where the US sent a big delegation including its energy and treasury secretaries and senior White House adviser Jared Kushner, who is due to speak along with Indian Prime Minister Narendra Modi.

Brazilian President Jair Bolsonaro is also participating in the event, as is the head of the World Bank. In 2016, Crown Prince Mohammed bin Salman launched a plan to transform the economy of the world’s largest crude exporter and wean it off oil by developing new industries. The $15 billion deals included sectors such as manufacturing and technology.

Most of the deals announced at last year’s event were clinched by Saudi Aramco. The state oil giant remained the biggest draw for investors eager for any news on its long-anticipated listing following attacks on Saudi oil facilities last month that initially halved the kingdom’s output. Some foreign investors have been wary of ploughing money into Saudi Arabia due to the commercial viability of some projects.

JP Morgan’s global banking head Carlos Hernandez said the kingdom is on the right path in terms of opening up its capital markets and reforms to make its stock exchange more attractive to foreign investors “We’re very encouraged that they’re doing all the right things on the path to be the major hub in the region,” he said on the sidelines of the conference.

Reinforcing a technology theme at the conference, SoftBank Corp’s humanoid robot Pepper greeted attendees at the Ritz-Carlton, while Boston Dynamics’ yellow robot dog was also on display plus a 3D interactive booth for Saudi’s planned Red Sea tourism. Some Saudi women opted not to wear the traditional abaya covering this year, highlighting social reforms carried out by the crown prince.

Saudi Arabia is pushing to float Aramco this year following another false start last month as the kingdom strives to deliver on a cornerstone of its economic transformation drive, which is the focus of the investment forum. Aramco CEO Amin Nasser was absent from the conference as he was meeting investors abroad to secure the planned initial public offering on Nov 3.

It could be the largest listing in history if the $2 trillion valuation target sought by the crown prince is met. “There are several Russian pensions funds who are interested to invest in the Aramco IPO and we have also received indications from our Russia-China fund of some Chinese major institutions also interested in Aramco IPO,” said Kirill Dmitriev, head of the Russian Direct Investment Fund.

In addition to the deals, which include a $120 million investment deal between Saudi Arabian General Investment Authority and BRF Brazil Foods, other agreements include a memorandum of understanding between Samsung and Saudi entertainment resort Qiddiya. One attendee said that while FII drew more participants this year the challenge is to see whether people will continue to come going forward, especially once the Aramco deal is out of the way.

In an interview with the Arab News newspaper, India’s Prime Minister Narendra Modi said that Saudi Arabia will invest in downstream oil and gas projects in India as part of a ‘strategic’ partnership. Modi will meet King Salman bin Abdulaziz and Crown Prince Mohammed bin Salman during the meeting.

“From a purely buyer-seller relationship, we are now moving toward a closer strategic partnership that will include Saudi investments in downstream oil and gas projects,” Prime Minister Modi said. Saudi Aramco along with UAE’s national oil company ADNOC has signed a preliminary deal with Indian state-run companies for a 50% stake in a planned 1.2 million barrels per day (BPD) mega refinery on the country’s west coast.

The Indian government also plans to sell its entire 53.29% stake in state-run refiner Bharat Petroleum Corp, at an estimated price of $10 billion. Aramco is also eyeing a 20% stake in the petrochemical and refining business of Reliance Industries in a multibillion-dollar deal.

During Modi’s visit, India will sign energy deals with Saudi Arabia including its participation in India’s strategic petroleum reserve. Organizers bragged that 300 speakers from over 30 countries including heads of global banks and sovereign wealth funds will take part in the three-day investment initiative.