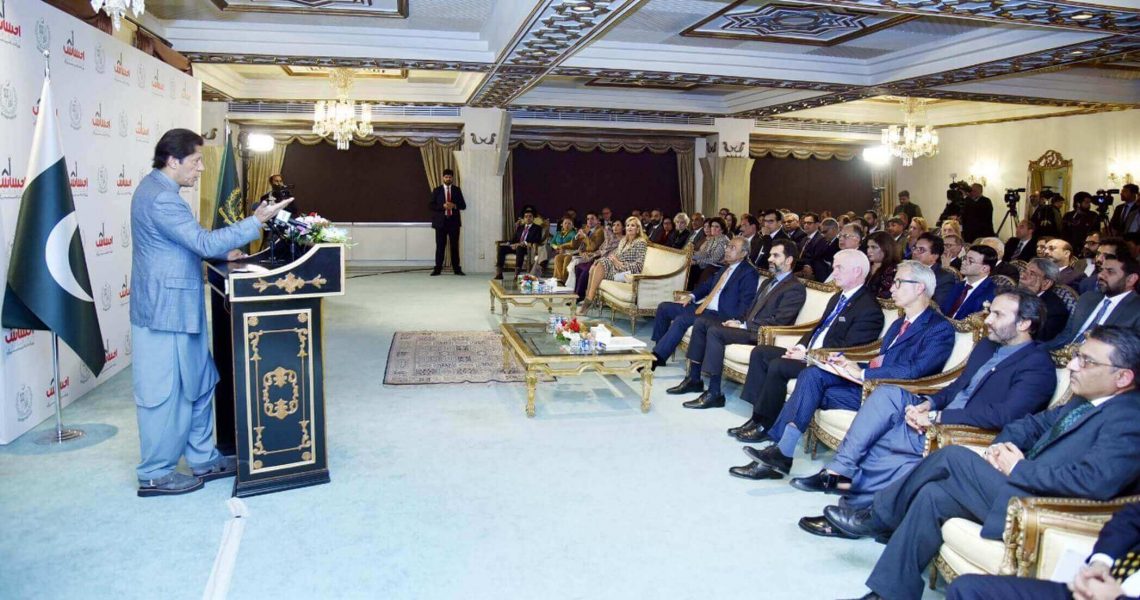 Key initiatives include one woman one bank account policy, Ehsaas Kifalat, bank accounts for informal workers, labourers, access to credit and microcredit for the daily workers. The prime minister told the gathering that his government is pursuing policies to lift poor people through different poverty alleviation programmes.

He said that the system of injustice and disparity of the past would not be allowed and there is a need to change the whole mindset. He said that the society had to decide that they could not allow this unfair, unjust system to continue. He said that the government is working to lift poor people out of poverty and how to take initiatives for their betterment.

PM AS SOCIAL WORKER: Decrying elitists system of the past, he said that it created divisions within the society where facilities of treatment or educational institutions for the rich and poor functioned separately. He said prior to his political career, he devoted himself to the social work and after coming into power, he is committed to building a social welfare state.

The prime minister said feeling of compassion and caring had been core ingredients of the Ehsaas initiative. He lamented elitists system prevailing throughout the globe, making rich nations richer and the poor, the poorer. Likewise, the poor countries get poorer and richer states get the richest, he said, adding that it is the biggest curse of this universe.

He said that there is something wrong with the system which created inequality where some people had so huge pelf at their disposal that they would never be able to spend it even if they get the chance to live for five times. On the other hand, “you have poverty. I feel that there is greed in the universe where rich wants to avoid taxes. They have these offshore accounts,” he said.

ENCOURAGING WOMENFOLK: Imran Khan also lauded China for taking 700 million people out of the poverty in the last three decades. He said that this has never been done in the human history. He also linked the major universal challenges like global warming and environmental degradation with greed for amassing wealth.

Queen Maxima said that financial inclusion meant to provide sustenance to the needy and the poor, job opportunities, education to the children and focused on economic stability. She stressed upon encouraging womenfolk especially those from the rural areas to be familiar with the use of technology for the financial inclusion which was negligible when compared to the males.

The programme would not be limited to cash transfers but would also seek to ensure access, affordability and usage of full spectrum of financial services including payments, savings, credit, and insurance products. In bank accounts for informal workers, she apprised the bank accounts would help ensure that informal workers have access to pensions, another key aspect of financial inclusion.

It would enable the government to enforce minimum wage, providing further protection for informal sector workers, she said. Under access to credit initiative, the National Poverty Graduation Initiative was launched. It combined elements of social mobilization, livelihoods development, with financial inclusion (interest free loans, asset transfers and vocational training) to move households out of extreme poverty and into sustainable graduation.

MICROCREDIT FACILITY: The initiative was being rolled out in over 100 districts and would impact 16.28 million people with 50% women, over four years. A total of 80,000 loans were being disbursed every month across Pakistan. He said that the microcredit facility would be extended for the daily workers as the poor in Pakistan rely on informal credit facilities and it would be helpful in bridging the gap between their consumption and expenses.

With the development of these mobile wallets, there was a shift towards providing nano or microloans through mobile technology at the click of a button, she said. The special assistant said that these initiatives were not mere academic but these were being implemented with letter and spirit under the guidance and leadership of the prime minister.