PSE Managing Director Farrukh Khan said that it was a very unfortunate incident but security arrangements were good enough to foil the attack. 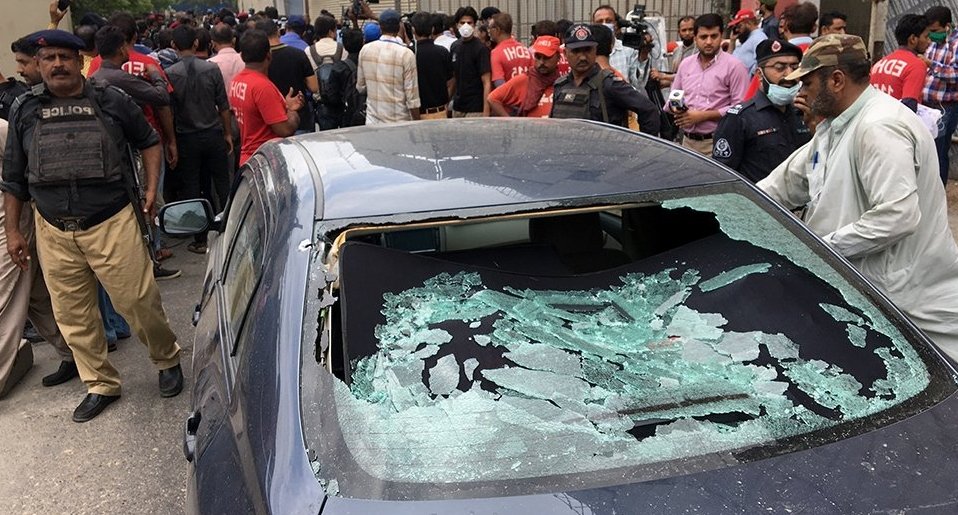 A group of four terrorists attacked Pakistan Stock Exchange’s building located at Karachi’s I.I. Chundrigar Road on Monday at almost 10:00 am with a heavy stock of ammunition.

According to the details and amateur videos made by the eyewitnesses, armed militants arrived in a sedan and tried to enter the building of Pakistan Stock Exchange (PSE). They can be seen carrying heavy weapons and having backpacks on their shoulders in the videos.

Security incident #alert: appears to be some sort of an attack at the Pakistan Stock Exchange in #Karachi — developing pic.twitter.com/wutYMNaQVM

In response to the attack, a joint action of the security guards, policemen and rangers were carried out and all the four terrorists were killed on the spot while two security guards and a police sub-inspector were martyred.

While talking to the media, PSE Managing Director Farrukh Khan said that it was a very unfortunate incident but security arrangements were good enough to foil the attack.

He added that the security guards at the entrance of the building of the PSE resisted the terrorists until the entry of the police and rangers.

He also said that despite the coronavirus pandemic, there was a big number of people inside the building and if the attackers were not dealt at the entrance they could have played havoc in the building.

He said that the business and trading activities were not affected due to the attack and they were continued even during the attack. He also confirmed that there was no prior information or threat about the attack.

Rangers Director General (DG) Major-General Omer Ahmed Bokhari, addressing a press conference in Karachi, said that the terrorists who had attacked the PSE building did not only want to enter the building while their actual plan was to hold the people hostage and the terrorists were carrying weapons including Ak-47s, hand grenades, and rocket launchers along with food and water.

He also said that security guards, police and rangers did a combine operation in only eight minutes and killed the terrorists while the entire building was cleared within 25 minutes after the attack so that business and trade activities might not get affected.

He further said that such an attack could not be carried out without the help of a terrorist intelligence and agency and RAW tops the list.

He added that those who are behind this attack wanted to create mistrust among the investors but the business trend went up instead of going down after the attack.

Prime Minister Imran Khan, Chief of Army Staff Qamar Javed Bajwa, Sindh Chief Minister Murad Ali Shah and Sindh Governor Imran Ismail has condemned the attack. The prime minister praised the security personals for foiling the plan of the terrorists, shared his condolences for the martyrs, and prayed for the injured ones.

Murad Ali Shah said that the enemy wanted to make use of the current situation of the country due to the coronavirus pandemic. He also directed the security agencies to be alert against such threats in the future too.