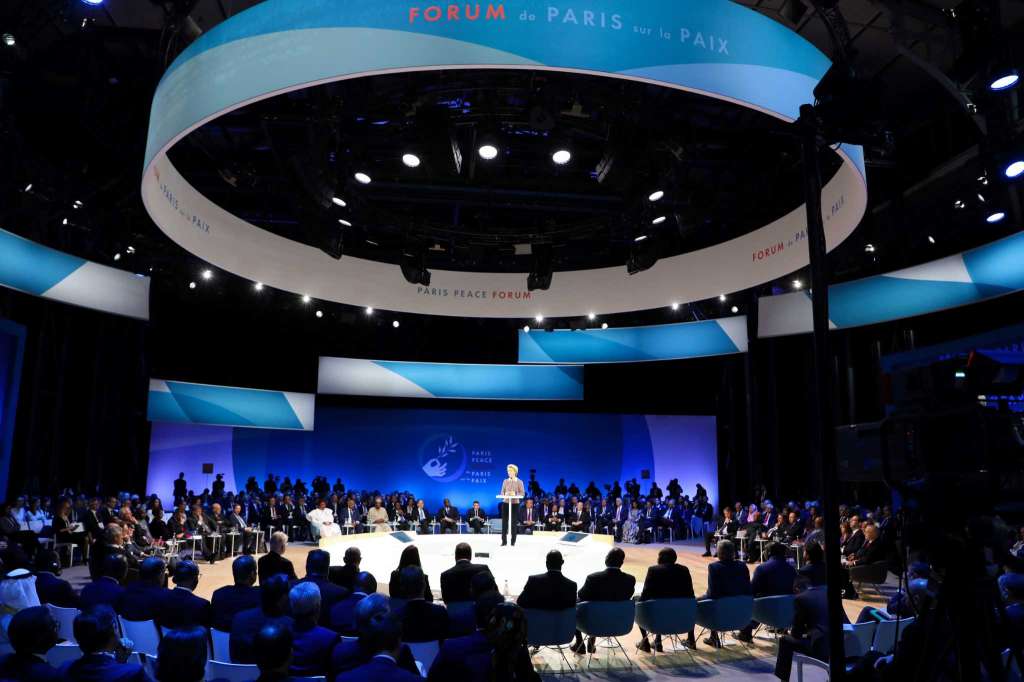 French President Emmanuel Macron called on the world to ramp up efforts to ease conflict and fight climate change, economic inequalities, terrorism, disinformation and cyber crime in a speech to world leaders and other high-level delegates at a forum for peace in Paris.

Some 30 heads of state joined international organisations, activists, entrepreneurs and others at the annual Paris Peace Forum, a key event avoided by United States and Russia. In his opening address, Emmanuel Macron said nationalism is war. “We are experiencing an unprecedented crisis in our international system,” he said.

He said that Europe is the place where the price of non-cooperation is best known. He said that the continent is in a position to be the trusted third party between the US and China. He has launched an attack on the idleness of those who close their eyes to the inefficiency of today’s global institutions in tackling the world’s problems.

He challenged the backlash to comments he made last week when he described NATO as being in a state of brain death – especially for its lack of response to the American withdrawal from northern Syria and subsequent Turkish incursion. Incoming European Commission president Ursula von der Leyen said that her vision is for a Europe that helps to reconcile those who are divided.

The annual event aims to find solutions to global challenges. Demographic issues, migration and the fight against poverty were among the other topics discussed.

The Paris Peace Forum aims to foster a multilateral approach to dealing with issues such as climate change, terrorism, migration and cyber insecurity – in the face of increasing global disharmony. “Collaboration is difficult as countries are turning inward. Today, the international community fails at producing the needed solutions.

The meeting chimes with one of the French president’s pet themes: defending multilateralism in the face of rising nationalism. The forum’s first edition last year was launched at the same time as the centenary for the end of the World War One. Its website says it has received 700 submissions for projects from some 115 countries.

Those selected include a scheme to encourage biodiversity at Europe’s airports, to programmes aimed at protecting the world’s oceans and helping poorer countries tackle climate change. Examples of projects launched in 2018 are a drive to improve water provision in the Sahel, an effort to boost cross-border cooperation on tax, and a scheme to help refugees in South Korea through taekwondo.