Central Ruet-e-Hilal Committee after persistent moon sighting efforts announced that moon was sighted in several areas and regions of Pakistan and confirmations were also received from across the country so Eid ul Fitar will be celebrated tomorrow, Sunday. 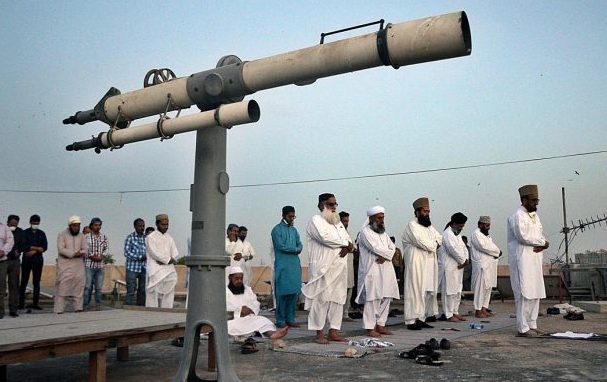 Central Ruet-e-Hilal Committee after prolonged moon sighting efforts has announced that Eid-ul-Fitr in Pakistan will be celebrated on Sunday, May 24, 2020.

According to the details, a meeting of Central Ruet-e-Hilal Committee was held in Islamabad today under the chairmanship of Mufti Muneeb ur Rehman. The meeting after persistent moon sighting efforts announced that moon was sighted in several areas and regions of Pakistan and confirmations were also received from across the country so Eid ul Fitr will be celebrated tomorrow, Sunday.

Central Ruet-e-Hilal Committee Chairman Mufti Muneeb ur Rehman announced in the light of evidences received from different regions of the country and wished the nation a happy Eid ul Fitr in advance.

He, however, said that moon was not seen by the zonal committee of Islamabad but evidences from other regions are credible enough to announce Eid ul Fitr tomorrow.

Earlier today, Pakistan Meteorological Department had announced that it was not cloudy outside but the chances of moon sighting are very low.

Science and Technology Minister Fawad Chaudhry however in a press conference today had said that according to the scientific calendar the new moon is already 20 hours old and that is a reasonable evidence to celebrate Eid on Sunday.

He further said that moon could be seen in areas like Pasni, Jeevni and Badeen from 7:45pm to 8:15pm today.

He also said that sin  ce the establishment of Pakistan, moon sighting has been an issue in Pakistan and multiple Eids are celebrated in the country.

He added that Ruet-e-Hilal Committee was formed in 1974 to resolve this problem but unfortunately this problem aggravated further and still it is not resolved.