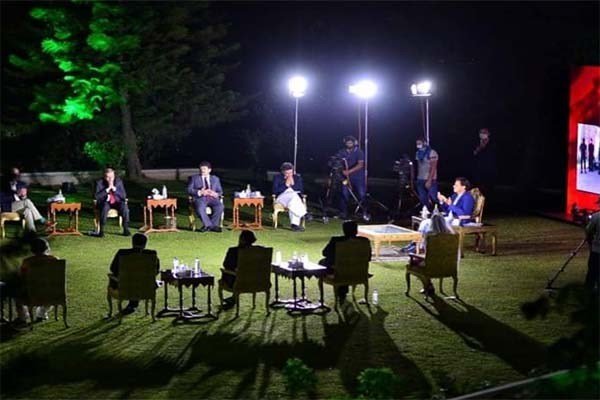 Ehsaas Telethon that was held on Thursday at the Prime Minister’s House became a fun telethon when so many interesting questions and funny things happened during the activity.

Former test cricketer and prime minister’s friend Javed Miandad also called and told the prime minster to visit him soon as he had some wonderful plan to repay the loans of Pakistan.

Hamid Mir reminded the prime minister of his fund raising efforts for Shaukat Khanum Cancer Hospital and said that Kamran Shahid and Faisal Javed were also your young tigers at that time.

Mohammad Malick asked the prime minister that who had been irritating him in his cricketing days, upon which, the prime minister replied that team West Indies were the real threat at his time. About Indian team, he said that he used to feel pity for the Indian side because they rarely won any game against Pakistan at that time. The Indian captain always looked nervous while playing against Pakistan, he added.

Hamid Mir asked the donors to play sixes instead of fours because at the end of the telethon top donors would be awarded with the bats and balls signed by Prime Minster Imran Khan.

In short, the climate of the telethon was very jolly yet constructive.

Responding to the questions, the prime minister said that the smart lock-down was the only option to fight against the coronavirus pandemic.

He said that there was no option other than implementing a smart lock-down as Pakistan could not afford a complete lock-down.

He said that a complete lock-down in Sindh was imposed in hurry out of the fear of the spread of the pandemic but it did not bring desired results.

He said that he had been reiterating it since the beginning of this outbreak that complete lock-down was not meant for Pakistan because there was a majority of poor and middle class people in the country who could not afford the closure of their businesses.

He further said that rich countries were also thinking of easing out the lock-down because of severe financial setback.

He said that Indian Prime Minister Narendra Modi implemented a complete lock-down in his country but above 10 crore people started protesting against hunger.

At the end of the telethon, Faisal Javed announced that 2,76,59,80,583 rupees had been donated to the Prime Minister’s Corona Relief Fund by then. The prime minister and all the participants thanked the donors for their generous donations.

At the end of the telethon, Maulana Tariq Jamil prayed for the well-being and safety of the country from the deadly coronavirus.