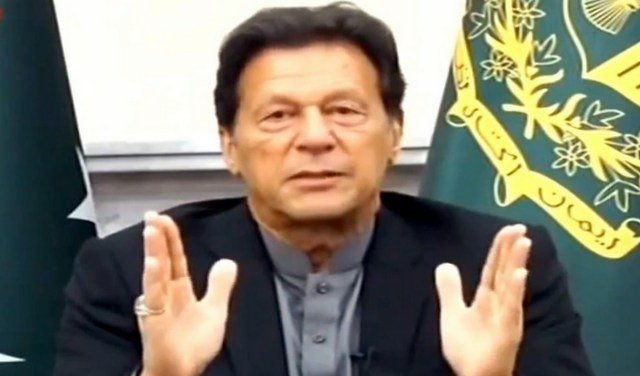 Prime Minister Imran Khan on Saturday appealed everybody not to politicize the coronavirus issue.

According to the details, Prime Minister Imran Khan while talking to media and his ministers on April 18 said that coronavirus was a natural calamity and nobody should make use of it to gain some political benefit.

He also said that there was certainly a group of people in the country who was not in favor of the betterment in the situation just to attain some political benefits.

He also requested everybody not to play politics at that point in time when the country needed united efforts to combat the coronavirus.

He also expressed displeasure on the spread of rumors about the increasing toll of deaths in Karachi. Talking about this issue, he said that it was very irresponsible on the part of those people who were spreading such things without any confirmation.

The prime minister expressed his satisfaction over the less damaging situation in the country but at the same time indicated that the number of cases might rise after the 20th of May. In that case, hospitals and the overall health system might go under huge pressure, he added.

He also said that the government was fretful about the aftereffects the pandemic could leave on the poor in the country.

The prime minister emphatically refuted the stories about hiding the real number of coronavirus cases and said that by hiding the actual number of cases, the patients coming to the hospitals would not vanish away.

He said that while developing some nationwide policy regarding coronavirus pandemic the government would be more concerned about the situation of the low-income strata of the society.

While quoting the example of Ansaar who helped Muhajreen at a testing time, he asked the people out there to help one another following the golden principles of Islam.

Talking about the leniency in the lock-down, the prime minister said that many governments across the world did blunders in the fight against COVID-19 but here in Pakistan the government was taking decisions keeping in view the economic conditions of the country and the welfare of the masses.

He also addressed the police force deployed for the effective implementation of the lock-down and said that try to make people understand the purpose of the lock-down instead of beating them with sticks.

He further said that the lock-down would go useless if the people took to streets against it.

He also expressed his hope that Pakistan would bounce as a much resilient nation after the end of this pandemic.

Earlier on the same day, Planning & Development Minister Asad Umar said that it was the responsibility of the government to save the lives of its people. He added that Pakistan was not in a position to shut down the business activities completely as the middle-class stratum already had started being affected by the lock-down.