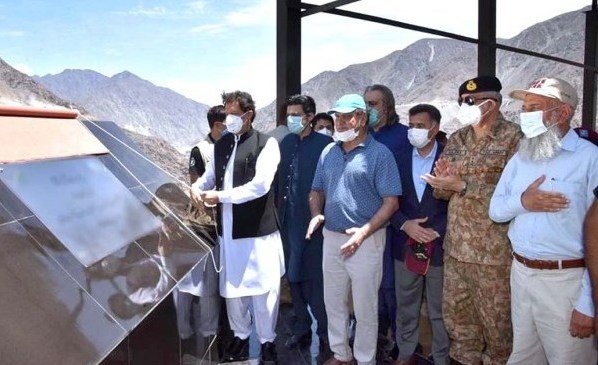 Prime Minister Imran Khan inaugurated Diamer-Bhasha Dam on Wednesday along with his ministers and government officials.

After commencing the mega construction work of the dam, he, while addressing a public rally, said that nations make progress when they think about the future and make difficult decisions.

He also said that big decisions make big nations and the nation that invests in human development excels in every field of life.

Human development means taking care of the people, their health, education, and other basic necessities of life by constructing hospitals schools and other community centers, he added.

Quoting the example of China, he said that China made progress in a very short span of time by planning its future.

He said that when once he visited China, he got to know about their long term policies spanning around the next 30 years. China is so consistent and fast in making progress that the rest of the world is fearful of its progress, he added.

He added that it was all because of the bad decisions in the past that despite having rivers and favorable weather conditions, we could not generate enough electricity in Pakistan.

The decisions made in the 90s to generate electricity with imported fuel caused irreparable loss to Pakistan, he said adding that those imports also declined the worth of rupee in the country and pushed the current account towards the deficit.

He said that when PTI’s government took the charge, the current account deficit was 20 billion dollars so it was very much obvious that there would be pressure on the rupee in the days to come.

He also said that when rupee declines against the dollar, the imported goods go expensive in the country and the poor people fall prey to high prices.

He said, “We are going to construct the third biggest dam in our country after Tarbela and Mangla dams.”

Quoting the example of China, he said that China had constructed 5000 big dams while the total number of its dams is around 80,000.

He added that Pakistan had only two big dams and the third one was going to be constructed.

These are the mistakes which caused us huge damages and the countries which far behind overtook us in every field, he further said.

He disclosed that it was decided about 40 years ago to construct Diamer-Bhasha Dam but no government started its construction work.

“Now, we have planned more dams after this with the help of our own natural resources”, he said.

He added, “We need to grow 10 billion trees in Pakistan as Pakistan is among those 10 countries which can be affected the most by global weather changes.”

He also said that “Diamer-Bhasha Dam will change the fate of locals and bring immense development in the area while providing jobs to the youth of the country.”