While speaking to a gathering at the launch of the monsoon tree plantation drive 2020 near Kahuta, Imran Khan said it was the time for all of us to stand united and achieve the target of 10 billion trees. 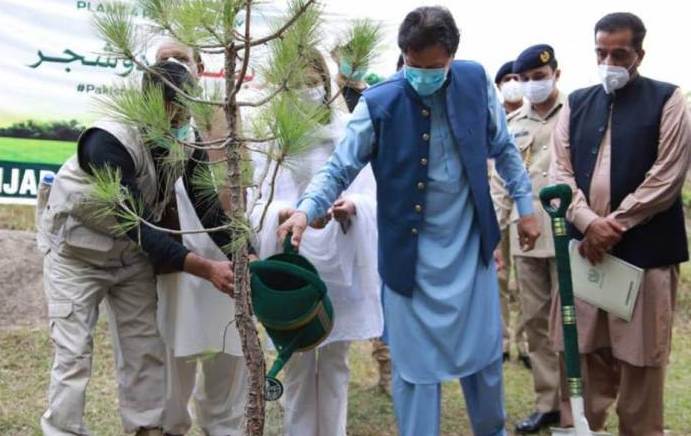 Prime Minister Imran Khan on Friday said the future generations of Pakistan could prosper only if they would provided with clean and green Pakistan to live in.

While speaking to a gathering at the launch of the monsoon tree plantation drive 2020 near Kahuta, he said it was the time for all of us to stand united and achieve the target of 10 billion trees.

He also said that tree plantation in Pakistan was the need of the hour to fight against the aftereffects of teh climate change and pollution.

He further said that keeping in view the growing pollution levels and declining environmental standards in the country it was very important to put serious efforts in plating trees and cleaning the environment.

He exclaimed with remorse that forests in Pakistan were gradually washed out that put serious threats to the wild life animals as well.

He also said that pollution levels in Lahore were also very high because of the lack of trees that might cause serious threats to the human health.

He added that it was one of the priorities of the government to address the issue of pollution in the country.

He said the government had recently announced the declaration of nine new national parks while it was also working on enhancing the number of exclusive zones where trees could grow fast and wild life animals could also survive.

He further said that his government had planted 30 million plants in last two years which it would increase to one billion by June next year.

He said that to fight against the increasing pollution and environmental degradation the government had launched the project of the plantation of 10 billion trees across the country in his five-year term.

He also expressed his hope that his government would surely meet the target of 10 billion trees in its five-year term.

He said that Pakistan was blessed to have 12 ecological zones and to save these zones from the effects of climate change was a national obligation.

Calling Green Pakistan his dream, he appealed to every citizen of Pakistan to plant a tree and take care of it uncles it becomes a healthy tree.

He also cautioned the nation to protect the trees not only from wild animals abut also from timber mafia.

He said that every school would arrange a two hours session once in a week to aware the students about the importance of the clean and green Pakistan.

He further said that it is the part of the faith of Muslims to take care of the cleanliness but West is far ahead of us in cleanliness standards.

He said that he had directed the chief secretaries of all the provinces to create the master plans of their cities so that nobody could encroach the agricultural land for other purposes.

He also planted a sapling in the presence of Minister of State for Climate Change Zartaj Gul and Advisor Malik Amin Aslam to launch the drive.