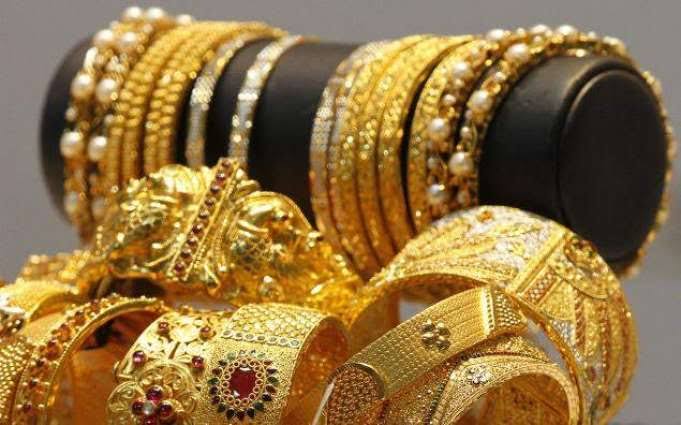 The price of 24 karat gold decreased by Rs50 and was traded at Rs 86,150 per tola, against the last closing of Rs 86,200 per tola the previous day, according to the Karachi Sarafa Association.

In international market, the price of per ounce gold increased by $3 and was traded at $1469 against closing of $1466 on last trading day. It is interesting that gold demand climbed in India, with sellers charging premiums for the first time in five-and-a-half months as jewellers took advantage of a price dip and lower imports squeezed supply.

Dealers charged a premium of up to $1.50 an ounce over official domestic prices this week, compared with discounts of up to two dollars an ounce last week. The domestic price includes a 12.5 percent import tax and a 3 percent sales tax. Gold futures were trading around 37,978 rupees per 10 grams on Friday, down from a record 39,885 rupees touched in September.

In top consumer China, premiums of $4-$4.50 an ounce were quoted, little changed from last week’s four – five-dollar mark-ups. “Demand in Shanghai is getting pressured because the economy is not doing well. People do not have enough money to buy the expensive metal,” said Samson Li, a Hong Kong-based precious metals analyst at Refinitiv GFMS.

Hong Kong and Singapore demand steadied after a dip in global benchmark prices, which have fallen over seven percent from a six-year high of $1,557 an ounce hit in early September. In Hong Kong, gold was sold at a premium of $0.30-$0.50 an ounce versus $0.40-$0.50 last week. Violent protests in the financial hub have deterred buyers recently.

BULLS LIFT PSX INDEX: The bullish sentiments ruled the Pakistan Stock Exchange (PSX) during the whole trading week, lifting the KSE-100 index by 1605.73 points to 37,583.89 points on the last trading day compared to its positioning at 35,978.16 points on last Saturday.

Total 395 companies’ transacted shares in the Stock Market on Wednesday, out of which 228 recorded gain and 150 sustained losses whereas the share price of 17 companies remained unchanged. The index noted bullish trend on Wednesday as KSE 100 index closed at 37166.96 points with positive change of 401.40 points (1.09%) compared to the closing at 36,765.56 the previous day.

A total of 275,430,851 shares were traded with total value o Rs 10.758 billion. Total 379 companies’ transacted shares in the Stock Market Wednesday, out of which 230 recorded gain and 130 sustained losses whereas the share price of 19 companies remained unchanged.