The bull fight got the attention of the passer byes and they started enjoying the activity even after parking their vehicles aside. 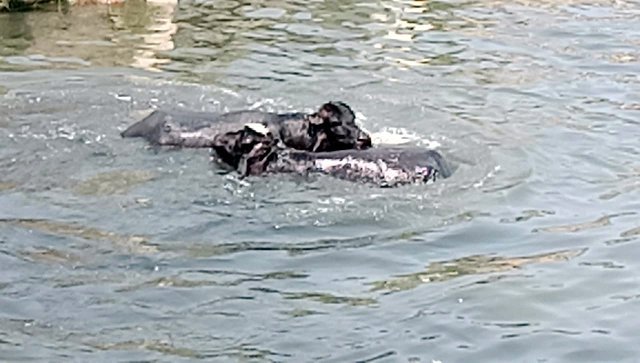 Everything is standing still here in Lahore due to the lock-down including sports too but two bulls somehow managed to entertain the people of Lahore when they started fighting while taking bath in a drain near Kamahan village.

As reported, two bulls were seen fighting in a drain near Kamahan village on Thursday. The fight got the attention of the passer-byes and they started enjoying the activity even after parking their vehicles aside.

The caretaker of the bulls was also there and he kept trying to distract them but they were perhaps doing that for the people who were watching them. A good number of people were enjoying the scene from the overhead Ring Road bridge while many spectators were standing on the roadside.

The left eye of one of the two bulls was also looking red as it was hit quite hard by the other one. People were taking photos and making videos also as it was free entertainment for them in the hot weather.

Though it is all about COVID-19 out there nobody among the spectators was even concerned about social distancing or any other thing as they were busy enjoying and talking about the bullfight.

When asked from the caretaker of the bulls about the fight, he said they come to the drain almost on a daily basis to take bath as the weather is getting hotter day by day. He added that they used to play and enjoy the water but today they were in a different mood. “They are fighting for the last fifteen minutes and I am trying to distract them by different means but they are not listening to me anyway, he added. He also said that he might ask for help from the people nearby if they did not end it after some time.

A spectator said that he was passing by the drain when he noticed that two bulls were not behaving well with each other. He parked his bike aside and started enjoying their fight, he added. He also said that he travels by this route daily and notices the buffalos taking bath in this drain but such fight is a rare case.

Some of the spectators when approached said that they were sharing the pictures of the fight on their social media accounts.

Though it was a wonderful fight and everybody enjoyed it too but it did not show any results as both of the bulls go tired after some time and the fight ended in a draw.

Their caretaker seemed relieved and happy as the fight did not cause any serious damage to the bulls.