by Dr. Khaula Rafeeq Aalam
A A 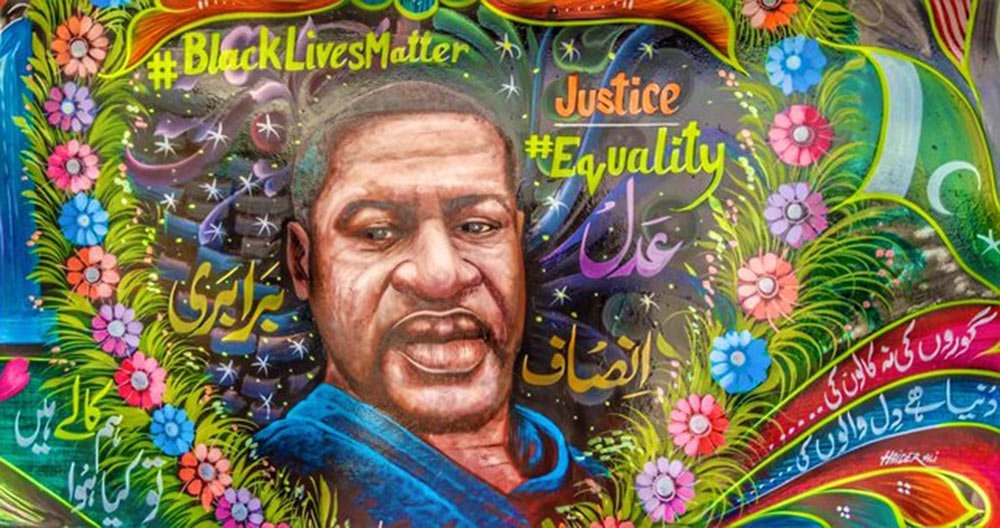 The USA is known for its unsolicited military and impeccable scientific advances among other things. However, today the streets of the global giant are ringing with the chants of its citizens who ‘can’t breathe’. The demonstrations call for dismantling the very institutional racism the USA itself nurtured since its birth.

The murder of George Floyd opened gates to protests and riots unlike anything ever seen before (if one discounts the 1960s). The unforeseen unfolding of mass mobilization prompted even the right-most Republican politicians to speak up in favor of this man of color. That is progress. People around the world stepped out in a show of solidarity. Be it people stamping their feet to Black Eyed Peas ’Where Is The Love?’ in New Zealand or making graffiti inspired by the fallen man on the fallen walls in Syria or painting truck-art-mural of George Floyd in Karachi, Pakistan.

The world confuses speech with struggle. I think Hasan Minhaj put it best when he said, ‘We love to see a black person ascend but we do nothing to raise the floor’.

The man of today has found himself standing on this very point many times in the past. However, the gusto of the words very seldom gets translated into the action of the officials. In other words, people forget. Humans were given this gift of forgetfulness so that they are able to move on with life and not dwell in the past over their mistakes and misfortunes – the likes of slavery. But trust the man to choose the shorter end of this two-edged sword for themselves. He forgets the lessons those mistakes and misfortunes were supposed to teach, the amendments he was supposed to make, and the improvements he was supposed to bring.

But isn’t this a black/white issue?

This is not our fight.

Being a responsible and educated citizen of Pakistan, what can I do to contribute beyond uploading a black picture on Instagram? Upload a desi George Floyd-motivated art on Facebook? Check.  Have a drawing-room conversation with my friends? Check. Oh, just remembered! I’m a Muslim, so the Snapchat story on the Hadith about a white, having no supremacy over a black and a black, having no supremacy over a white except for piety. Check. Done and dusted.

Now I can go back to discussing how the pale yellow color is making me look so dark in all my Eid pictures, so no pastels from now on.

See the problem? I understand that the Pakistani nation is fighting on too many fronts already. Adding one more to the list would not help. But now that the murder of an innocent black man has shoved the heinous matter into the spotlight, and has generated the well-deserved but scarcely-observed momentum that it has, Pakistanis can learn a thing or two.

We are a nation that came to the defense of our Cricket Team Captain, Sarfaraz when he yelled “Abay Kaalay, kya parhwa kay aaya hai tu aaj?”, directed at South African batsman Andile Phehlukwayo as he leads his team to a series-leveling win. We said that he did not mean it in a ‘condescending’ manner. He might not have. That does not change the fact that this is an appalling and unconditionally unjustifiable statement to make, be it in a rush of adrenaline, be it to demean someone, or just as a casual remark.

We are a nation where Muslims are in majority. Some from this majority always try to speak about Christianity but, somehow, Christians do not own the same freedom of speech. We admire and applaud if any Hindu individual makes it big from the scratch. However, when a minority sanitary worker expresses ambitious dreams for his kin, some people are swift to put him in his ‘place.’ Generally speaking, the media coverage of the non-Muslim population is stereotypically linked to blasphemy. Institute of Advocacy, Research, and Development published a study showing that the 12 major media outlets of Pakistan have not shown single news of non-Muslims which does not link them to the blasphemy.

We are a nation where some clerics had secured a ‘ticket’ to the ‘right destination’ themselves. Thus, completely nonchalant about their own end, they heckled Jemima Goldsmith, an English woman of Jewish-origin, for being an agent of what they believe the ‘Jewish lobby.’ To this day, many who oppose Imran Khan – the current prime minister and the supremo of the ruling Pakistan Tehreek-e-Insaf, would not put in the effort to criticize his flawed policy, rather would just call him a ‘Jewish agent’ to register their dissent.

We are a nation that will salute a 21-year-old freshly inducted captain in the armed forces but would be unable to rise from our seats as an expression of respect when a 50-year-old professor walks in the room. We understand that we are not obliged to wait in line if we happen to be a ‘colonel’s wife.’ We understand that if we have a certain surname, we can casually throw around the name of the largest security organization of the country to threaten the woman around whom a husband forgets the sanctity of his own marriage.

We are a nation who would flip out if our daughter wants to marry a guy who ranks somewhere below us in our self-created hierarchal caste system. We would shame our son if he wants to marry a girl who is not as pale as the Victoria secret model we saw last night on TV. Being fair is an unnegotiable trait in the potential spouse. We clown people in our surroundings on screen as well as off-screen, who have more melanin in their skin than we have decency in our jeers.

We are a nation that will enhance their social capital by using all the correct hashtags but will not acknowledge the performative nature of our activism.

The Pakistani brand of racism is an amalgam of classism, caste-ism, sexism, and colonialism at the hands of the Persians, Mughals, and the British. All these ‘isms’ lacerated the minuscule tolerance we possessed previously. The fault lines amidst us continue to rise and we assume that by uploading a ‘woke’ picture on Instagram, we did our part.

In the book ‘Measuring Racial Discrimination’, 4 types of discrimination have been outlined:

Before remarking how the fabric of American society needs to make some changes, let’s make some changes in the fabric of our desi mindset. Let’s start small:  Let’s not buy skincare products which promise to transform our skin tone 7 shades lighter or magically impart ‘ultra 3D glow’. The skin market in the Asia Pacific alone is valued at over 13 billion USD. Fairness creams outperform other beauty products with no skin lightening agents immensely. Let’s not ask a contemporary their surname or their father’s job title to size them up. Let’s talk to the non-muslim help in our community and see how/if we can assist them in rescuing their children from the fate they have lived out. Let’s say thanks to the birth of a baby for being healthy, not for being of a certain color. Let’s find the common ground between the two monotheistic religions, Christianity and Islam.

Khaula Rafeeq Aalam, a doctor by profession The author is a resident of Lahore.