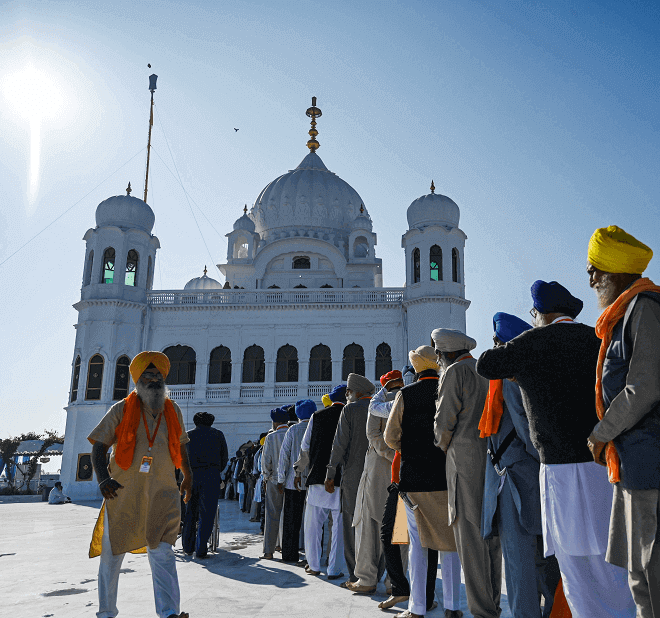 Prime Minister Imran Khan, ahead of 550th birth anniversary of Baba Guru Nanak, finally inaugurated the much-anticipated Kartarpur Corridor project that would give a visa-free access to followers of Sikhism to visit Gurdwara Kartarpur Sahib, one of the holiest shrines located just 4.1 kilometres from the border in Pakistan.

Addressing the ceremony, Prime Minister Imran Khan said that he is pleased to see happiness on the faces of Sikh pilgrims who had got their longstanding demand fulfilled. Baba Guru Nanak had promoted humanity and unity, while opposing any social division and hatred, he said.

Being inspired by the teachings of great Sufi saints including Baba Farid, Nizamuddin Aulia and Moeenuddin Chishti, people revered them and visit their shrines regularly, said Imran Khan, who wore white bandanna around his head as bare head is considered inappropriate in Sikhism.

The smiling Sikh pilgrims walked into Pakistan with traditional turbans and holding kirpan (small sword) in their hands soon after the gate built on Pak-India border was opened. The prime minister reached the venue through the shuttle service carrying the Sikh pilgrims. Buses were awaiting the pilgrims with welcoming banners and wheelchairs were placed there for the elderly or ill persons.

SOCIAL UNITY: The pilgrims were later driven to the venue of the inauguration ceremony after going through immigration and security checks. At the terminal, the staffers were alert to swiftly accomplish the screening process. All around, there was an ambiance of celebration in both Pakistani and Indian Punjab.

Addressing the event, Prime Minister Imran Khan said if the border is opened for trade, one could guess how much prosperity the region could achieve and the people get rid of poverty. He reiterated that the real leaders had always contributed to bring social unity and never got votes by creating hatred in the society.

He said that Nelson Mandela was highly revered in South Africa because he had fought for unity in the society that had been apartheid by racism and saved his country from bloodshed. For the first time, the Sikh people would be able to come to Kartarpur and pay respect to the founder of their faith, he said.

The pilgrims, who so far had been content of viewing their holiest shrine from binocular towers built in Gurdaspur district of the Indian Punjab, would now be able to quench their thirst of the holiest pilgrimage. The corridor would lead the pilgrims straight to the Gurdwara built to commemorate the site where Baba Guru Nanak spent the last 18 years of his life before he died there in 1539.

Addressing the ceremony, Prime Minister Imran Khan said that he is pleased to see happiness on the faces of Sikh pilgrims who had got their longstanding demand fulfilled. Spread over around 400 acres, the Kartarpur Complex consists of a new courtyard, museum, library, dormitories, langar khanas, locker rooms, an immigration centre and an embankment to protect the temple from the floods.

Pakistan has announced to allow visit of 5,000 pilgrims to the shrine everyday with additional numbers on special occasions, subject to capacity and expansion of facilities. As a special gesture, the government also waived off the requirement of passport for Sikh pilgrims and 10-day advance intimation for the whole year.

CORRIDOR OF LOVE: Addressing the audience, Foreign Affairs Minister Shah Mehmood Qureshi said that it is a historic day as the ‘corridor of love’ had been opened for a community of 140 million people. He said that doors of Darbar Sahib had been opened for Sikhs so that they might come here and enjoy hospitality and love from Pakistan.

He said that Pakistan has been working on two corridors – China-Pakistan Economic Corridor and Kartarpur Corridor. The first one is for economic development and the second one is for love, respect and peace in the region, he said. He announced that the prime minister had pointed out 400 Hindu temples which would soon be renovated and Pakistan would invite Hindus across the world to visit them.

SIKHS TO PROMOTE PAKISTAN’S IMAGE: Navjot Singh Sidhu told the gathering that Sikandar-e-Azam conquered the world by force but Prime Minister Imran Khan has won hearts of people with love. “He (Imran Khan) has made the history by opening historical Kartarpur Corridor and fulfilled the long cherished dream of four generations of Sikh community, who were anxiously waiting to visit their holy place,” he said.

He said that he saw many politicians but never saw a brave man like Imran Khan, who has given such a great happiness to him by opening this corridor that he never imagined. “Every leader focuses on profit and loss but Imran Khan is the first lion who heard the voice of heart,” he said, adding that Sikh community will promote soft image of Pakistan at international level.

MESSAGE OF PEACE: Minister for Religious Affairs Nurul Haq Qadri said that the inauguration of Kartarpur Corridor is the greatest message of peace after the partition in 1947. Akal Takht Jathedar Giani Harpreet Singh said by opening of Kartarpur Corridor, the 70-year old demand of Sikhs had been fulfilled for what they were thankful to both the governments.

He said that the Muslims and Sikhs shared religious values as Baba Guru Nanak had also taught oneness of Almighty Allah and had spent a long time here in this area. Calling for promotion of the philosophy of Baba Guru Nanak for peace and unity, he said that around 10,000 Sikhs resided in Pakistan who should also be provided such a facility to let them visit the shrines in India.

“The founder of Sikhism was born here. This is our real home,” said Surpreet Singh, a 32-year-old pilgrim from New Delhi on his first visit to Pakistan. “I have wanted to come here for a long time. The people here are very friendly – they are familiar to us,” he said as Sikhs, who wore different lanyards, mingled inside the temple complex.

INDIAN PM FLAGS OFF FIRST BATCH: Indian Prime Minister Narendra Modi, on the other side of the border, flagged off the first batch of the pilgrims led by Giani Harpreet Singh to the Gurdwara Darbar Sahib through the corridor. Before seeing off pilgrims, he hailed opening of the corridor. “I also thank Prime Minister Imran Khan for understanding India’s wishes and turning Kartarpur into reality.”

“It is like a dream come true. The Pakistani government fulfilled its pledge to the Sikh community in a short period. The Kartarpur Corridor is a mega project. Such a huge initiative has never been accomplished in such a short time in Pakistan’s history,” said Sardar Gobind Singh, caretaker of Sikh temples in Kartarpur.